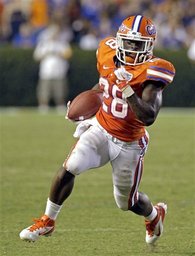 FOXBOROUGH, Mass. (AP) The New England Patriots have agreed to terms with Olympic silver medalist Jeff Demps, who played running back at Florida but was not drafted by an NFL team because he said he wanted to focus on his track career.

Patriots player personnel director Nick Caserio said in his meeting with reporters on Friday that the team had nothing to report. But later in the night, after reports began to surface, the Patriots issued a press release, announcing the signing of the 22-year-old sprinter.

Demps earned the Olympic silver medal in the 4x100 relay as part of the team that finished second to Jamaica at the London Games last week. His football agent, Daniel Rose, told The Associated Press this week that several NFL teams were interested in the former running back from Florida.

Tampa Bay and the New York Jets were among the teams that confirmed an interest. Caserio confirmed that the Patriots scouted Demps, but he went undrafted after saying he was giving up football to focus on track and the Olympics.

"Good with the ball, good speed, caught the ball OK, a little bit undersized," Caserio said. "Florida has had a track record of some pretty good football players that have come out of there. But any time we go into a school, we'll look at everybody regardless of whatever their circumstance is."

Demps had 2,470 career yards rushing and 23 touchdowns in four seasons with the Gators, but he did not attend any college football all-star games or take part in any NFL draft workouts to focus on track. He averaged 28.8 yards a return during his four-year career and also won multiple national championships in track and field.

"Obviously, he wants to get to work," Rose said earlier this week. "He had some commitments he had to finish up with the Olympics, and we've been very honest and open with the teams. Now, that's all over with and he can go to sleep and wake up Thursday morning and focus on football."

The Patriots (No. 2 in the AP Pro32) opened training camp almost a month ago, but there is no concern that Demps will be out of shape, having just returned from the Olympics. He ran in the preliminary heats and was replaced for the finals, but collected a silver medal for his efforts.

"He's speed," Rose said. "The NFL is about speed and there's so much you can do with a guy like that if used correctly. He could be a kick returner, slot receiver, stuff like that. There's gadget plays teams can come up with.

"If used correctly, he could definitely be a weapon."

The Patriots opened the preseason last week with a 7-6 win over New Orleans. They will play host to Philadelphia on Monday.