Auriemma: No interest in coaching at 2016 Olympics 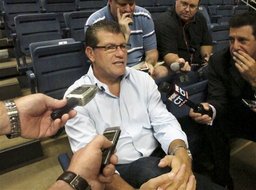 STORRS, Conn. (AP) Connecticut coach Geno Auriemma said he has no interest in returning as head coach of the U.S. national team for the 2016 Rio Olympics.

Auriemma met with reporters at UConn, five days after coaching the U.S. team to a fifth straight Olympic gold medal.

He said he was honored to get the job and ecstatic with the results, but described his interest level in doing it again as "zero."

"If you ask me right now, today, I would say it is somebody else's turn," he said.

Mike Krzyzewski returned as coach of the men's team after the 2008 Games to lead them to another gold medal in London, but the USA has traditionally switched women's basketball coaches after each Olympics.

USA Basketball spokeswoman Caroline Williams said it is too soon for the organization to begin thinking about the coach of the 2016 team.

"USA Basketball generally doesn't even begin the process until at least the winter after the Olympics," she said in an email. "We still have many competitions this year and the next major competition for our USA National Team isn't until 2014, so the coaching staff for the next squad hasn't even come up for discussion yet."

Auriemma said he believes it will be more difficult for the women to win in 2016. Other countries such as France and Turkey are making great strides with their programs, and some key players for the U.S. are aging, he said.

"Do you see any other Sue Birds and Diana Taurasi's and Tamika Catchings out there?" he said. "I don't. I think we're going to have to work harder than we've ever worked to stay where we are."

Auriemma, who has led UConn to seven national titles, said coaching the Olympics was the most pressure he has ever felt.

The U.S. team faced its first halftime deficit in the Olympics in 12 years before pulling away to beat Australia 86-73 in the semifinal game.

France stayed with the U.S. in the first 12 minutes of the final before Candace Parker scored 21 points, including eight straight in the second quarter, to help the U.S. win the gold, 86-50.

Auriemma said he would like to concentrate on coaching his Huskies, who he said could be very "special" over the next two seasons. UConn returns almost everyone from a 33-5 team that lost in the national semifinals and brings in another top-rated recruiting class.

As to whether he would ever consider returning to USA Basketball, Auriemma compared the experience to eating a bowl of his favorite mint-chocolate chip ice cream.

"The second bowl doesn't taste as good as the first one," he said. "It never has and it never will."