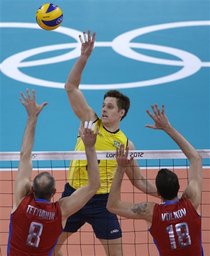 Muserskiy had 31 points and the Russians won their first men's volleyball gold in 32 years by rallying for a five-set victory in Sunday's final at the London Olympics.

"With Brazil, even in the first set, they won the first point and from the first point they put psychological pressure on us and played a very fast game," said Muserskiy, a 7-foot-2 middle blocker who would look right at home in an NBA locker room. "But after the second or third set they began to get tired, that's when Russia begin to pick up momentum. People were expecting and we delivered."

It was Russia's fourth gold medal in the sport, most of any nation. But the last time Russia was atop the podium was in Moscow, when the former Soviet Union won gold on home soil in 1980.

The Russians thought they had won it on Muserskiy's kill in the fifth set and began to celebrate, but the officials awarded the point to Brazil. After regrouping, Muserskiy came right back to spike match point.

No. 1 Brazil was attempting to sweep the indoor volleyball titles after its women's team beat the United States in Saturday's final at Earls Court.

But second-ranked Russia picked up momentum after winning the third set to stay alive and went up 8-4 in the fifth on Maxim Mikhaylov's kill. The Russians piled on top of each other to celebrate when it was finally over.

Wallace de Souza had 27 points for Brazil, which also won the silver in the 2008 Beijing Games.

"It's hard to tell," de Souza said when asked what happened. "You train a lot for that every day, you don't believe something like that could happen. You're winning 2-0 and then you start feeling the pressure. We came here to get the gold, but we got the silver."

Saatkamp's block gave Brazil a 19-15 advantage in the second set, and the fans were in a frenzy when Dante Amaral's kill made it 21-17. Sidnei dos Santos Junior raised his arms to urge the crowd on.

Amaral spiked to put Brazil up 2-0.

But Russia fought back in the third, pulling even twice before turning away Brazil's two chances to win the match. Brazil held off set point twice until Russia claimed it on Alexander Volkov's block.

Mikhaylov's kill gave Russia a 22-15 lead in the fourth and the match was even after Murilo Endres' serve went long.

Brazil defeated Russia in the preliminary round and the countries had split eight Olympic meetings before Sunday's final.

London was his goodbye after 16 years with the national team.

"I finish my career with the silver medal - which is not what I expected," he said.

The Brazilians were without 6-foot-11 opposite Leandro Vissotto Neves, who injured his upper right leg in the semifinal victory over Argentina.

Brazil also lost in an emotional Beijing final that came after U.S. coach Hugh McCutcheon's father-in-law was killed at a Chinese tourist attraction a day before the opening ceremony.

The defending champions, playing in London under coach Alan Knipe, were eliminated with a straight-set quarterfinal loss to Italy.

Italy won its fourth men's volleyball medal in the last five Olympics by beating Bulgaria for the bronze earlier on Sunday. The Italians won 25-19, 23-25, 25-22, 25-21, with captain Cristian Savani scoring a game-high 23 points.