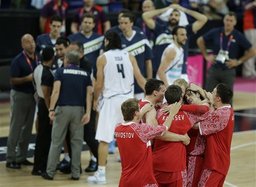 The bronze-medal game ended with an ugly confrontation.

Alexei Shved scored 25 points - 13 in the fourth quarter - and Russia won its first Olympic medal in men's basketball with an 81-77 win on Sunday over Argentina, whose players angrily questioned the referees after the final horn following a wild scramble in the closing seconds.

Manu Ginobili scored 21 and Andres Nocioni 16 for Argentina, which was looking to add another bronze to its Olympic collection after winning one in China and gold eight years ago in Athens. But this tournament ended with Argentina's players without a medal and looking for an explanation.

"This is one of the most painful defeats or my life," Ginobili said.

Fridzon's layup with 5.2 seconds left sealed it for Russia, which came away with the ball after it changed hands several times near midcourt.

When the game ended, several Argentine players surrounded referees Bill Kennedy, Jose Carrion and Juan Arteaga in protest and guard Pablo Prigioni kicked an electronic clock off the scorer's table in disgust. A water bottle was thrown on the court that appeared to come from the stands.

Argentina had taken the lead after rallying from an 11-point deficit in the second half.

Ginobili's layup gave Argentina a 77-76 lead with 43 seconds left, but then Shved countered with a 3-pointer to put Russia back in front.

Nocioni missed a jumper from the corner, but it appeared Argentina might get another chance when Prigioni came up with the ball close to the sideline at halfcourt. But it was tipped away with bodies flying all over the floor and wound up bouncing to Shved, who alertly passed it up the floor for Fridzon, who drove in for his uncontested layup.

As the final seconds ticked off, Russia's players piled on each other near one foul line while Argentina's swarmed Kennedy and the other officials, screaming and demanding answers.

Ginobili, Nocioni and Scola all complained to no avail and Prigioni, who signed with the New York Knicks this summer, sent the substitution clock flying to the floor with his kick, an ugly display of sportsmanship by one of the world's best teams.

"I don't want to talk about the last play because we didn't lose it in the last play," Argentina captain Luis Scola said. "It's not the ref's fault, it was our fault. I was mad because I thought it was a foul. Doesn't matter, we didn't lose the game right there."

For the Russians, the bronze was the topping on a a strong tournament.

They came to the London Games as unlikely medal contenders, but won their group in preliminary play and appeared on a collision course with the Americans before stumbling in the semis.

This was a victory to toast.

"It's very important for Russia," Shved said. "We won bronze at Europeans last year. We won bronze at Olympics. Maybe we'll get a different medal next time - maybe gold or silver."

This was probably the final game for Argentina's "Golden Generation," a group that became national heroes and gave their country international basketball relevance by beating the U.S. in the 2002 world championships and then again at the Athens Games in 2004, when they won gold.

Ginobili, 35, has already said this may have been his final tournament for Argentina, and Scola, Nocioni, Prigioni and Leonardo Gutierrez - all holdovers from the '04 team - are all in their 30s.

It ended short of a medal, and following the tough loss, the San Antonio Spurs star reflected on Argentina's stay among the game's elite.

"It is an impressive run, even though we lost," he said. "A third podium was what we were aiming for and it's very sad and disappointing to lose like this because it was in our hands and we let it slip. When we lost for the world championship it really hurt. It's been 10 years since, and the bitterness of that moment was gone and now I feel worst.

"But we need to keep our heads high. I'm still very proud of my teammates."