Brazil stuns US for gold in women's volleyball 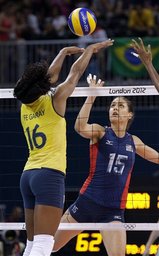 Brazil denied the United States its first Olympic gold medal in women's volleyball Saturday in a 3-1 upset that had the Brazilians turning somersaults on the court and some American players sobbing.

It was the first loss for the U.S. at the tournament and the second straight gold medal for Brazil. American star Destinee Hooker, the second-best scorer at the London Olympics, was held to 14 points.

"We felt we lost control in the first set, but we never lost sight of our objectives, and that was to win gold," Carvalho said. "We knew the U.S. is a great team, that the game would be tough. But we managed to turn it around."

The Americans were favored and started their captain, Lindsey Berg, despite a left Achilles strain earlier in the competition. She had been listed as day-to-day but promised to play in the final.

The U.S. took an 11-4 lead on Hooker's ace. Brazilian coach Jose Roberto Guimaraes shouted at his players to calm down during a timeout, but two straight kills from Hooker and Foluke Akinradewo's block made it 19-7. Jordan Larson spiked for the set.

In the second set, Brazil bounced back to take an 11-6 lead Fernanda Rodrigues' kill, sparking a thunderous ovation from the fans at Earls Court. Logan Tom's spike tied it at 12, but Brazil scored six straight and took the set.

The Brazilians celebrated wildly after taking a 6-2 lead in the third. The United States narrowed it to 21-19 on Hooker's kill, but it was as close as they came, and Castro's kill won the set.

With momentum now on the side of the Brazilians, Claudino's kill gave them a 13-9 in the fourth. Thaisa Menezes extended it to 23-14 before Rodrigues' match-winning kill.

Castro and Claudino leapt into the official's chair, and Brazil's coaches rushed to pile on the other players. Later, the Brazilians danced into the medal ceremony.

Brazil became the third team to repeat as gold medalist. The Soviet Union won in 1968 and 1972, while Cuba won three straight starting with the 1992 Barcelona Games. Brazil also won bronze in 1996 and 2000.

"I'm proud of these girls. We worked really hard, we came into this final game undefeated. You can't get any better than that," Hooker said. "I think Brazil kicked it up a notch after the first set. A wonderful win for them."

The loss in London was a disappointing finish for U.S. coach Hugh McCutcheon and kept him from the distinction of steering both the American men's and women's teams to gold medals.

He came over to the women's side after leading the men on an undefeated run through the 2008 Beijing Olympics. On the day before the opening ceremony, McCutcheon's father-in-law was stabbed to death at a Chinese tourist attraction.

McCutcheon will coach the women's volleyball team at Minnesota starting this fall.

"Yeah, listen, they played better today," McCutcheon said. "I still believe that team is one of the best, if not the best in the world, and we weren't that today. That's what it comes down to. We train for four years, we come here for two weeks, and it comes down to two hours. I don't think we played poorly tonight, I think Brazil played really well."

The U.S. men, playing under coach Alan Knipe, were not as successful in London, losing in straight sets to Italy in the quarterfinals.

On the women's side, the bronze medal went to Japan, which defeated South Korea earlier Saturday.