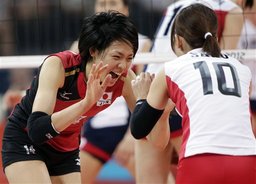 LONDON (AP) The president of volleyball's governing body says video replay will be introduced in time for the world championships.

FIVB President Wei Jizhong says with shots reaching up to 75 mph "a line judge cannot judge this, impossible. (We will) use new technology in the line and above (the) net to solve all the problems."

Wei, whose term ends in September, added he was happy with the men's competition at the Olympics but the women's tournament "level is not as expected. ... they did their best but due to their age they cannot reach (a) high level."