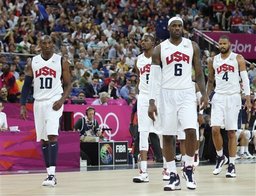 LONDON (AP) Basketball's best will apparently be welcomed in Rio.

The head of the sport's governing body said Saturday he doesn't foresee an age limit for the 2016 Olympics, tempering talk that the 20-year anniversary of the Dream Team would be the final appearance of the NBA's biggest stars.

"The feeling is I think that we will not be proposing an under-23 age for 2016," FIBA secretary general Patrick Baumann said before watching the women's medal games.

NBA Commissioner David Stern and deputy commissioner Adam Silver have said they may favor Olympic basketball turning to a model like soccer, in which teams are made up of players 23 and younger, with three roster exceptions for older players.

Baumann said FIBA and the NBA are having ongoing discussions, and he wants to do whatever is best to continue the worldwide growth of basketball while also being respectful of team owners' concerns about the wear and tear their players face when playing for their national teams.

But any potential rules changes for the Olympics have to be proposed this year, so Baumann said it's "probably premature to make any changes to the Olympic program."

Baumann did say one possible solution was changing the cycle for the World Cup of Basketball, currently played every four years. He said the 2018 competition could be pushed back a year and would then serve as the qualifier for the 2020 Olympics, instead of making teams potentially play three years in a row.

He also said FIBA would continue to push the International Olympic Committee to expand the Olympics from 12 teams to 16, which he said could change the competition format and led to a shorter tournament.

Stern and Silver began promoting the age-limit idea this spring and have been heavily criticized by players and fans who grew up watching pros in the Olympics. NBA players made their debut in 1992 and were a spectacular success, with Michael Jordan, Magic Johnson and Larry Bird as the headliners of a U.S. team that stormed to the gold medal and triggered an explosion of popularity in the sport.

Baumann said the partnership has been beneficial to FIBA and the NBA's international business, and hopes they will keep working together.

If the rule was changed, LeBron James said he wouldn't play for the U.S. men's team, even if he got an exception.

James is unsure of his future plans, anyway, but said he definitely wouldn't take an exception because he wouldn't want to go without the rest of his teammates from the U.S. team that he played with in 2008 and are back in Sunday's gold-medal game against Spain.

Larry Probst, the chairman of the U.S. Olympic Committee, said he does not know for certain how the age-limit issue would play out in the long term.

But he offered his personal opinion - and he likes seeing NBA athletes in red, white and blue.