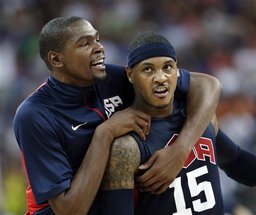 LONDON (AP) Once Carmelo Anthony drilled the 3-pointer that put Argentina away, the U.S. bench emptied onto the floor for a brief celebration.

After Anthony retreated down the court like a boxer told to find a neutral corner following a knockout, Kevin Durant bear-hugged his Olympic teammate, which may be the only way to contain the incomparable scorers on the U.S. roster.

Then again, there may no stopping these Americans.

Not now. Not this close. Not one win from gold.

"We won't take this opportunity for granted," LeBron James promised. "We look forward to the challenge on Sunday."

Spain may not be as eager.

With the four-headed offensive juggernaut of Anthony, Durant, James and Kobe Bryant combining for 68 points and taking turns inflicting punishment on Argentina, the U.S. rolled to a 109-83 win on Friday night in the semifinals of the men's tournament, setting up the same gold-medal game as four years ago in Beijing.

It's a rematch with Spain. It may be another mismatch.

Through seven games, the Americans have been better than advertised. They've turned what was potentially a competitive tournament into a one-team showcase of their superior skills. The U.S. has had too much outside shooting, too much inside muscle, too much of everything for any opponent to handle.

And now that it's decided to ratchet up its defense, which had been suspect during stretches of the preliminary round, the Americans are poised to claim a second straight Olympic title.

"From here on out, you'll see a different focus level for us," Anthony said.

Durant scored 19 points, James and Anthony added 18 apiece and Bryant scored 13 for the Americans, who only led by seven points at halftime.

But as has happened in almost every game, the U.S. shifted gears after halftime and ran away.

Durant made four 3-pointers in the third quarter, when James delivered one of those devastating dunks that only he can.

Starting on the left side, James dribbled across the lane, then down the right side before rising and slamming the ball through the rim, a play that seemed to take the collective breath away from sellout crowd in North Greenwich Arena. It certainly knocked the wind out of Argentina.

"That gave us some momentum, that dunk," Anthony said. "We fed off that energy."

Then, it was Anthony's turn.

With the U.S. already well ahead, Anthony knocked down three consecutive 3s in a span of 42 seconds, a breathtaking barrage like the one he had when he made 10 3-pointers and scored 37 points to help the U.S. put up an Olympic-record 156 points last week in a win over Nigeria.

Anthony, though, couldn't do it without someone giving him the ball. This U.S. team has been unselfish, at times to a fault.

"The good thing about these guys is when they see one guy's got it, they go to him," coach Mike Krzyzewski said. "The scoring capability that each of them have, and then to kind of focus on that one guy when they see he has it is really gratifying to me and tells me what type of guys I've had the honor of coaching so far."

Despite injuries and inconsistency in this tournament, Spain is back in the final for the second straight Olympics. Rallying in the second half, the Spaniards defeated Russia 67-59 in the first semifinal, doing their part to guarantee another crack at the Americans, who beat them 118-109 at the Beijing Games.

The world has changed a lot in four years, but not in international basketball.

The U.S. and Spain have been on top since '08, and now they'll meet again.

"It's only right," said James, who added seven assists and seven rebounds against Argentina. "Everyone said that this is the game they wanted to see. We're happy as a team we're able to be back in this position."

The Americans believe this team is better than the '08 squad, and they are certainly more potent - with a chance to end up outscoring the original Dream Team in 1992.

"You have three scorers on this team who get blistering hot if they make two shots in a row," Bryant said. "I've never seen anything like it."

Beaten by 29 points by the U.S. in pool play, the defending bronze medalists stayed close in the first half, making five 3-pointers in the second quarter. But staying close with the Americans is one thing. No team except for Lithuania has been able to catch and pass the U.S. in the second half.

"We had a great run in the first half," said Manu Ginobili, a three-time Olympian who isn't sure if he'll stay on the national team beyond these games. "We started the third very well. And then we blinked."

Argentina was the one - with a win in the 2004 semifinals - which stopped the U.S. team's streak of golds dating to '92, when pros were first allowed inside the five rings.

The climb back to the top was difficult for the Americans.

Though the Americans did have the close game against Lithuania, they are averaging 116.7 points - right behind the Dream Team's record of 117.3 - with a low of 98.

Bryant was criticized for saying this U.S. team could possibly beat the immortalized group of Michael Jordan, Magic Johnson and Larry Bird. Those comparisons will surely come again if the Americans complete their dominance and take care of Spain.

James was asked if this group is better than the '08 squad.

The bigger question is: Can Spain beat the U.S?

"Yeah," Ginobili said. "They've got to play almost a perfect game and they've got to force them to play 5-on-5 and not let them run. Yeah, yeah, they can be beat. It's not easy. The odds are not with Spain, but, of course, if you play your best game and they're not very inspired, you've got a shot."