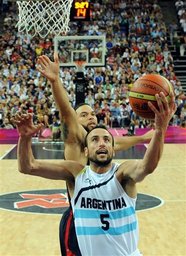 LONDON (AP) Manu Ginobili is unsure if he will continue playing for Argentina after these Olympics.

Ginobili said Friday he doesn't know how he will feel in two years for the next World Cup of Basketball, or even if he will still be playing at all.

"A lot of things can happen. I'm 35. I know the chances are less every year, but I can't say I am retiring because I don't know," Ginobili said.

The U.S. men's basketball team beat Argentina 109-83 in the semifinals, ending the San Antonio Spurs guard's chance to win a second gold medal. But the Argentines can still add a second straight bronze if they beat Russia on Sunday.

"We won two medals. We got a chance now to get another one," Ginobili said after leading Argentina with 18 points.

Ginobili is one of the core members of Argentina's "Golden Generation," the veterans who stamped their country as an international power in the 2002 world championship when they became the first team to beat a U.S. squad with NBA players.

They beat the Americans again in the 2004 Olympic semifinals, and Ginobili, Luis Scola and the other veterans have kept Argentina near the top, ranked No. 3 in the world behind the U.S. and Spain.

"It's probably going to be one of the highlights of my career, this group," Ginobili said. "I'm very proud of representing my country with these guys. We are trying to make our legend even bigger by getting another medal. Once it's over and we go home with the bronze on our chests, we'll talk about it and see how it feels."