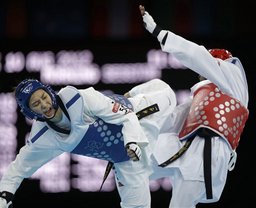 Hwang beat Nur Tatar of Turkey in a final in which both fighters were on the attack from the start. Both scored head shots within 12 seconds of the match's start, with the kicks nearly landing simultaneously.

Hwang won 12-5. She is the first woman to win three Olympic taekwondo medals. The 26-year-old Hwang also won a bronze at the 2004 Athens Games and is a two-time world champion.

Hwang used her speed and flexibility to outkick her opponents on Friday, often throwing several targeted head shots from the same leg.

It is South Korea's second Olympic taekwondo medal of the London Games after Lee Dae-hoon won silver in the men's lightweight division on Wednesday.

The bronze medals were won by Paige McPherson of the U.S. and Helena Fromm of Germany.