Steven Lopez of US loses in Olympic taekwondo 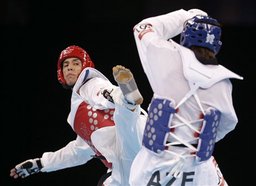 LONDON (AP) Steven Lopez turned an ankle in practice two weeks ago. Diana Lopez has been dealing with an injured left knee for months.

Family secrets - until they were revealed at the London Olympics.

Not only was there no taekwondo gold for the Lopez clan in London, there was no medal at all. And what were first thought to be minor injuries were much more significant - a broken fibula for Steven Lopez, a deep root meniscus tear for Diana Lopez, who announced the severity of the issues on her Twitter account.

"Strange turn of events," Diana Lopez wrote, adding, "We gave it all for our country."

A day after Diana, his sister, lost her first-round fight, Steven fell in his opening bout in the men's under-80-kilogram division Friday, ending his hopes of a third Olympic title.

For the first time since the Korean martial art became a full medal sport at the Olympics in 2000, the Lopezes are going home empty-handed.

"You work a lifetime for these moments," said U.S. coach Jean Lopez, older brother to Steven, Diana and Mark Lopez, a former silver medalist and the team's training partner. "But it's been unusual circumstances that we've had to deal with."

And those circumstances got more unusual as the tournament went along.

The extent of the injuries was not revealed - or, it turns out, even known - before either Steven Lopez or Diana Lopez fought, their brother and coach not wanting to give any opponent a competitive edge.

Steven Lopez lost a 1-0 lead and was beaten 3-2 by Ramin Azizov of Azerbaijan, No. 1 seed in the under-80-kilogram field.

The only way Steven Lopez could have stayed in the medal hunt was for Azizov to make the gold-medal match, and he did not. When Azizov lost a quarterfinal to Italy's Mauro Sarmiento, the Lopez run at the London Games came to a quiet end.

It was, at best, doubtful if Steven Lopez could have fought again in the first place.

Jean Lopez said he was considering not allowing his brother to compete in the repechage if he even qualified, saying the ankle is so bad that Steven Lopez "can barely walk." At the time, he made no mention of the fibula fracture, or even raise the possibility that the ankle injury could have been something else.

Maybe it was fortunate for the family that Azizov lost. If nothing else, it spared Jean Lopez what he said would have been "a tough decision."

The Lopez family has won five medals at the Olympics - gold for Steven in 2000 and 2004, a silver for Mark at Beijing in 2008 and bronzes for Steven and Diana four years ago.

But this trip has been difficult, with injuries compounding losses.

"At one moment I heard a pop," Diana Lopez said Friday. "So that's when I knew."

There's some confusion as to what exactly exacerbated Diana Lopez's injury when she fought Thursday.

She tore a ligament in her left knee in 2009, never had surgery, and about three months ago began dealing with a suspected torn meniscus. Jean Lopez said she "definitely dislocated" the knee warming up before her first-round fight Thursday, while Diana Lopez said the "pop" came in the second fight, her repechage match against Finland's Suvi Mikkonen.

"In my first fight against China, I knew I wasn't 100 percent with my knee of course, but I wasn't going to make any excuse," Diana Lopez said Friday, walking with a slight limp and with her knee heavily wrapped. "But going into my Finland fight, that's when I knew my knee was (shot)."

Steven Lopez, like his sister, was unseeded at the London Games, which meant a tougher-than-expected first-round opponent. The draw for the Olympics was based in large part on the world rankings, and the Lopez family tends not to participate in many international events - the ones that play the biggest role in the ranking system.

"I never put myself in the position mentally to not go in there with 100 percent belief that we won't find a way to win," Jean Lopez said. "As a general, I can't entertain that at all."