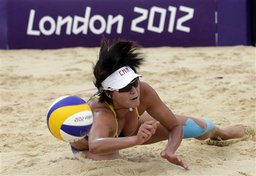 LONDON (AP) The dancers are dressed to titillate, and the players wear even less: bikinis that reveal every movement of their muscles as they dig and dive for the ball.

Amina El Sergany does not need a referee's platform to be noticed on a beach volleyball court.

The first Muslim woman to officiate the sport at the Olympics, El Sergany worked the London Games wearing a hijab that, when covered by the standard referee's uniform, showed only her face. From her elevated position beside the net, she stood in stark contrast to the beach party wardrobe worn by the Horse Guards Parade Dance team and the athletes themselves.

"It doesn't matter for me. It is normal for me," the Egyptian said this week in an interview between assignments. "I think first they (the players) were afraid of me, but after that they got used to me and deal with me in a good way. Nobody talks to me about that. They respected me like every other referee."

It's been said that the ideal referee is the one that's unnoticed. But El Sergany said she hoped her visibility would encourage women from all cultures to take up the sport.

"The most important thing is not to win or lose but the participation in these games, to be involved in world actions, not to be isolated," she said. "I'm proud. It will help lots of women, not only Muslim women."

In an Olympics with unprecedented participation by women, including the first-ever female athletes from Saudi Arabia, beach volleyball has been fighting the perception that its athletes are more about sex appeal than sport. Patiently tolerating the questions about their bikinis - athletes insist it is the logical choice for a sport born on the beach - players say they are willing to accept the leering because it gives them a chance to win new fans for their game.

The skimpy uniforms are no doubt one reason why beach volleyball is the rare sport where the women's competition is at the forefront, with TV ratings better for the women than the men. And when the Daily Mail newspaper ran a photo spread about the event on its Web site, it included 16 pictures: 15 of them were of bathing suit-clad women, including three of the dance team, with one picture of the British men's team, way at the bottom.

But even as women approached - or surpassed - equality in the competition, FIVB President Jizhong Wei knew there was still work to be done. In January, he was asked by the United Nations sports adviser to make the sport more welcoming to Muslim women who, for cultural reasons, would not compete in the traditional bikini. The result: a new rule that allows women to wear shorts and T-shirts.

"After the changes, the reforms, women all over the world will be part of this," El Sergany said. "We do not have any women players back in Egypt. But after the regulations, I will try."

Wei knows that it will take years for women just starting the sport to compete for spots in the Olympics, so he also looked for other ways to get more women on the sand. He set a goal of 30 percent female referees at the Olympics - as it turned out, four of the 16 in London were women - and gave national federations money so they could help get them the experience they needed to officiate at the highest level.

"To encourage the women officials, we need a political decision, not a technical one," Wei said in an interview at the FIVB hospitality suite between beach volleyball sessions.

And he wasn't done.

In London and at other FIVB events, male and female referees are assigned to matches by the officiating supervisor without regard to gender.

"In other sports, women only officiate women's games. I want it different," he said. "Women referees can officiate men's sports. That makes it really equal."

A volleyball referee for 17 years, El Sergany out went on the FIVB tour to prepare for the Summer Games, working semifinals at events in Gstaad and Moscow and as the second referee in Beijing and Shanghai. She was the first referee, the one that stands on a platform beside the net and has the final say on all calls, for the women's final of an under-19 tournament in Cyprus.

In London, she worked matches in the preliminary and knockout rounds but not any in the medal rounds. Although there were several controversial referee decisions during the tournament - including a close sideline call to end the men's gold medal match on Thursday night - there was nothing unusual in El Sergany's.

"It's nice to see people here from different cultures, but she definitely doesn't get treated any differently," said American Misty May-Treanor, calling El Sergany one of the easiest officials to deal with.