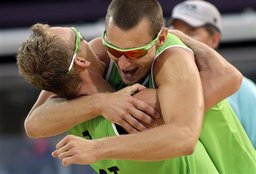 LONDON (AP) Emanuel's spike to save a fourth match point sailed over Julius Brink's outstretched fingertips and bounced hard on the sand by the sideline.

The match was over.

It just didn't know it yet.

"We had to wait to see which way the referee pointed," said Jonas Reckermann, Brink's partner. "When we saw he pointed to us, then I knew we would get the point. It was total emotion."

Brink and Reckermann won the Olympic beach volleyball gold medal Thursday night, beating Brazil 23-21, 16-21, 16-14 for the first European victory in a sport long dominated by Brazil and the United States. The Germans needed an extended first set and another in the third, clinching the victory only after referee Rui Carvalho ignored pleas from the reigning world champions to step down from the platform and check out the ball mark himself.

Replays appeared to show the referee's call was correct. Emanuel agreed after the match that the ball was out, though Alison was still adamant it touched the purple tape.

"Yes, we think it was in. But we're not going to say anything about that because we want to go out with our head up," said Alison, a 27-year-old first-time Olympian who helped Emanuel medal for the third consecutive time. "Four years ago I was at home watching the Olympics. Now I have the silver. The next Olympics is at home in Rio and I'm happy about that."

One night after an all-American final brought a bit of the colonies to Horse Guards Parade, the Brazilian fans gave it a Carnival flair - waving their flags, stamping their feet and singing along with the rock music.

But it was the Germans who heard their national anthem wafting over Henry VIII's 500-year-old jousting grounds, just a few hours after Janis Smedins and Martins Plavins of Latvia beat the Netherlands 19-21, 21-19, 15-11 to take bronze and match Europe's biggest medal haul since the sport was added to the Summer Games in 1996.

"All the time, it's Brazil and U.S.A.," said Smedins, who spoke with the Latvian president on the phone after beating Reinder Nummerdor and Rich Schuil to give their nation its first medal of the London Olympics and its first beach volleyball medal ever. "Now it's some other teams. It's amazing."

The gold-medal match was tied 1-1 after two sets, and Brazil fell behind 14-11 in the third before saving three match points to tie it. Needing to win by two in the first-to-15 third set, Germany took a 15-14 lead and then won it when Emanuel's spike landed just wide of the sideline.

The Germans watched the linesman raise the red flag to signal the ball was out, then turned to see the referee point to their side of the net. They dropped to the sand to embrace, even as Emanuel and Alison marched glumly under the net and pointed at the spot the ball landed.

They called for Carvalho to come down and see, but he declined.

The winners - and losers - were announced over the loudspeaker.

Emanuel, who is the first man to win three Olympic beach volleyball medals, needed encouragement from his partner to step onto the silver medalists' portion of the podium. But afterward, he told reporters he saw on the replay the ball was out.

"Right now I'm very satisfied because both teams deserved to be the gold medal. For my country, it's good to have one more medal," said Emanuel, who was attempting to become the first beach volleyball player to win gold medals with two different partners. "I will enjoy the silver medal because it's not easy to be in the top in beach volleyball. You saw a lot of really good teams passing by this 20 days here. Only three have medals. I'm very satisfied to have one of them."

Brink and Reckermann won the 2009 world title and the last two European championships. But their credentials could not match those of Emanuel, who won gold in Athens and bronze in Beijing with Ricardo.

Emanuel's stature in the sport is so outsized that he is known as "The King." And it was his 25-foot statue that was in St. James's Park next to that of American Kerri Walsh Jennings, who with Misty May-Treanor won her third consecutive gold medal on Wednesday night.

Brazil twice went to set point in the first, but Germany saved them both and took a 22-21 lead when Emanuel's spike went long and wide. Reckermann clinched the set with his shot down the line - just the third set the Brazilians had lost in the whole tournament.

Brazil pulled away in the second to take a 12-7 lead, then held on to force a decisive third set. It was tied at seven in the third before Germany opened a 13-9 lead, and when Reckermann hit a cross-court winner the Germans were one point from victory at 14-11.

But a spike by Alison that knocked Reckermann's hat off saved one match point, and Emanuel's ace saved another. Reckermann spiked one off Alison to make it 15-14, then served for the win. Brazil set up the shot, but Emanuel's spike landed just wide.

"I really tried to touch that ball. Thank God I missed it," Brink said. "The end of the match was like a drama."