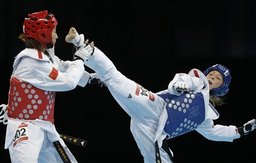 It came in the women's 57-kilogram division on Thursday.

Cheered by thousands of British fans, Jones defeated China's Hou Yuzhuo 6-4 in a cagey final in which both fighters struggled to score. Jones eventually got past Hou's blocks and landed several body shots.

Earlier in the day, Jones ousted the top seed, Taiwanese fighter Tseng Li-Cheng, in a tense semifinal after a burst of combination kicks in the fight's last minute. Tseng later won a bronze.

The other bronze medal was won by France's Marlene Harnois.