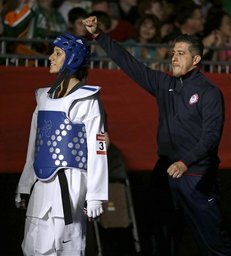 LONDON (AP) When the pairings for women's under-57-kilogram taekwondo at the London Olympics were released, Diana Lopez figured her path through the bracket would be difficult.

To her chagrin, she was right.

Lopez's hopes for gold in London disappeared in an instant on Thursday when she fell 1-0 in overtime to two-time world champion Hou Yuzhuo of China. After almost seven scoreless minutes, one well-placed kick was the only point of the bout.

"I felt stronger than her," Lopez said. "I just went off the line, and she tapped my chest protector. That's it."

The electronic scoring system flashed - fighters wear vests with sensors to determine whether kicks are worth a point - and Hou raised her arm in celebration. Lopez left the mat with a stunned look on her face. Her coach and brother, Jean Lopez, stood up to greet his sister, then stared blankly ahead.

It was a far cry from how they entered the arena about 10 minutes earlier, Diana Lopez smiling and nodding as she walked toward the mat, Jean Lopez a step behind her and confidently holding his right fist skyward.

"I've seen her fight before," Diana Lopez said of her opponent. "Nothing spectacular. She's not a front-leg fighter, which is even better for me. I could have let go a little bit more."

She added: "I was hesitant because I knew she liked back kicks. My brother told me to wait and just hit on her motion when she came in, but she was waiting for me, so we were waiting for each other. And I couldn't believe that registered. I'm still in shock."

The London Games are the first to use electronic body protectors that automatically record kicks and punches delivered with enough force. Head kicks are still scored manually.

"I didn't know what was going to score, what wasn't going to score," Lopez said. "I felt there were some points defensively where I kicked, and nothing registered. That's the way an electronic scoring system works."

Hou and Diana Lopez went through three scoreless two-minute periods, both seeming to play plenty of defense against the other, urged by occasional yells of "fight" from referee David Coupar of Denmark.

In the end, all Hou needed was one opportunity.

"I was just standing still waiting for my opponent to attack me first," Hou said. "And then I hit her, scored the only point I needed to win."

In the end, there wasn't even a medal for Lopez, who took home a bronze in 2008.

Because Hou made the gold-medal match, Lopez made the repechage round, meaning two wins later Thursday night would have gotten her a bronze. Lopez waited five hours to see whether her Olympics were over, then three more before getting back on the mat.

She lost to Suvi Mikkonen of Finland 9-4, ending her medal chances.

"I was a little tired," Lopez said. "But that is not an excuse."

So now the family's medal hopes in London are on Steven Lopez's shoulders.

Steven Lopez, Diana Lopez's brother and a two-time Olympic champion, fights Friday in the under-80-kilogram division. At least one member of the Lopez family won a medal at each of the previous three Olympics, starting with the Sydney Games in 2000.

Much like his sister, Steven Lopez has a tough draw awaiting him.

Steven Lopez, the Olympic gold winner in 2000 and 2004 and a bronze medalist from 2008, opens his schedule in London against reigning world bronze medalist Ramin Azizov of Azerbaijan - the No. 1 seed.