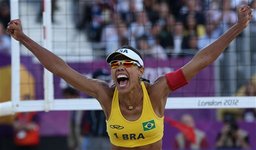 LONDON (AP) Juliana waited an extra four years to make her Olympic debut because of an injury that knocked her out of the Beijing Games two days before the opening ceremonies.

Reunited with longtime partner Larissa, the Brazilians finally earned a spot on the beach volleyball podium.

"I am very happy that I got a medal," Juliana said after the reigning world champions rallied from a first-set loss to beat China in the bronze medal match on Wednesday night. "It's not gold. But for us, it's gold."

The top-seeded team in the tournament and the champions of the world tour six times in the past seven years, the Brazilians were deprived of a chance to play in Beijing by Juliana's injury and knocked out of the gold medal game in London by Americans April Ross and Jennifer Kessy. The U.S. team played in the gold medal match later Wednesday against two-time gold medalists and fellow Californians Misty May-Treanor and Kerri Walsh Jennings.

After losing the first set 21-11 in a scant 17 minutes, Brazil was just two points from defeat when it rallied to win the second set 21-19 and then took the third 15-12 to beat Xue Chen and Zhang Xi. The Chinese team, which split up after winning bronze in Beijing, reunited in 2010 and was hoping for second straight medal.

Brazil is the top-seeded team in the world, as it was in 2008 before Juliana tore her anterior cruciate ligament leading up to the Summer Games. Larissa played with a substitute and finished tied for fifth.

"Before I went to bed last night, I said, 'Larissa, I'm very proud to play with you at the Olympics," Juliana said. "Not for the result, but for the experience."

The victory in the bronze medal match assured Brazil, which has never won fewer than two medals since the sport joined the Olympics in 1996, of two more medals in London. Emanuel and Alison are in the men's gold medal match on Thursday and guaranteed at least silver.

"An Olympic medal means a lot to Brazilians and the athletes," Larissa said. "This medal is very important for our careers. We've waited eight years and we needed this medal."

The Chinese led the second set 19-16 before Brazil won five consecutive points to take the set and even the match. Juliana celebrated by running from the net to the end line and spraying sand onto the cameramen and photographers beyond the boards.

Brazil opened a 6-2 lead in the third set and led 13-9 before China cut the deficit to two points and Brazil called a timeout. The Brazilians moved one point from victory when Zhang spiked it long.

"It's something that can always happen," Xue said. "One point can change the entire match."

After one match-point save, Larissa poked it to the corner of the court for the victory, her hat flying off as she jumped.