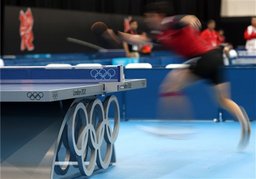 LONDON (AP) Some call it table tennis. Others prefer pingpong. Originally, though, it was whiff whaff.

Victorians invented the parlor game using dining tables and wine corks - or champagne corks - fashioned into balls. Everything was improvised. The "net" may have been a row of books, or cigar boxes, or a piece of string anchored by wine bottles - presumably empty.

Stiff place mats were possibly the first rackets or paddles.

By any name, the indoor version of tennis returns to its roots at the London Olympics, which Mayor Boris Johnson promised four years ago in Beijing at a handover ceremony attended by London organizers.

Johnson drew wild applause and laughs when he reminded the audience in China that "pingpong is coming home."

"I say this respectfully to our Chinese hosts, who have excelled so magnificently at pingpong," Johnson said. "Pingpong was invented on the dining tables of England in the 19th Century. And it was called whiff whaff. ... And I say to the Chinese, and I say to the world, pingpong is coming home."

Johnson was also quick to poke fun at his countrymen, and predictably he used the French to set up his joke.

Well, it's back. But don't look for any British medalists. Asia dominates the game and could win every medal in men's and women's singles, and the two team events.

Five of the top six men in the world rankings are Chinese, and there's only one non-Asian in the top 10. The top four women are Chinese - and the top 10 are all Asians, with others from Japan, South Korea, Taiwan, Singapore and Hong Kong.

China has won 20 of 24 gold medals in the previous games, and is expected to sweep four gold medals again when play opens Saturday at the ExCel Arena, which is also the venue for weightlifting, judo, taekwondo, boxing, wrestling and fencing.

Many believe the game was invented in the early 1880s by British military officers in India, or South Africa. Lore says they brought it home and, like many sports invented or codified in Britain, it spread. And following the pattern of cricket, rugby or football, other nations eventually surpassed the British in winning championships.

Table tennis is expected to draw sellouts of 6,000, dwarfing usual tournaments that may draw hundreds - or fewer.

"This is a fantastic stage," Alan Cooke said Friday, coach of the British women's team and a two-time Olympian. "There is still a love in Britain for this sport, but we have not been out in the forefront promoting it."

Cooke has been working with the England Table Tennis Association on a program called "Ping Launch," which is putting tables around the country with plans to install them in city parks, which is a fixture of any park in China.

The game got an unexpected boost on Friday when the Duchess of Cambridge - wife to Prince William - was shown on the front page of The Times newspaper delivering a forehand topspin shot while playing in front of school children.

The book is compiled by researcher Colin Clemett and edited by Ian Marshall, who will be broadcasting the matches for the BBC.

Marshall is a retired history teacher from northern England who got the book bug after the Beijing Games, inspired by Chinese organizers who spelled out the history of the sport on a wall at the table tennis venue at Peking University.

"I told the people in London we needed to do something equal to this," Marshall recalled.

The book traces the roots from Victorian England, lists all Olympic results, and documents the game's first "world championships" in London in 1926.

This was a world championships in name only.

It was to be called the European championships, until - according to Marshall's research - "several Indian players, mostly students who were living temporarily in London" wanted to play.