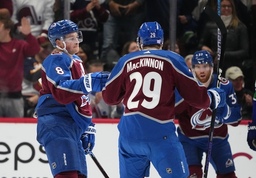 Long before training camp, the Washington Capitals knew they would be without Tom Wilson and Nicklas Backstrom for at least the first few months of the season. Before stepping on the ice, they learned Carl Hagelin would be out long term, as well.

The Caps prepared for that by trading for Connor Brown and signing Dylan Strome. What they didn't prepare for was losing Brown to a torn ACL - the same injury Wilson is recovering from - and being without T.J. Oshie and Dmitry Orlov for an extended period of time.

No team has been hit as hard by injuries as the Capitals, but the reigning Stanley Cup champion Colorado Avalanche and the Philadelphia Flyers aren't far behind. All three came into the season with different expectations and the team aiming for a repeat is unsurprisingly handling the adversity better than playoff-contending Washington and rebuilding Philly, thanks in large part to stars Cale Makar and Nathan MacKinnon remaining healthy.

"They have the high-end talent that the Flyers do not," retired NHL forward Scott Hartnell said. "It's plain as day. The guy that wins the Norris and wins the Conn Smythe, then you have MacKinnon who could've won the Conn Smythe, just as well, how well he played. They're carrying a big load."

According to NHL Injury Viz, a site that tracks the impact of injuries around the league, Washington has the most man-games lost with 153 to Philadelphia's 141 and Colorado's 100. The Flyers have been playing without players representing nearly $30 million in salary, the Capitals just under $28 million and the Avalanche over $17 million.

At the height of their injury woes Nov. 7-9, the Capitals were missing players with salaries adding up to almost half this season's $82.5 million cap. As they piled up, Washington lost nine of 11 games.

"This is the hand that we're playing," coach Peter Laviolette said. "There's no excuses for not playing good defense or not attacking offensively or not winning a hockey game. Those things have to get checked off and they have to get done."

Gabriel Landeskog has more recently lifted the Stanley Cup than played a game that counts for the Avalanche after undergoing knee surgery in October. The Avs are still missing their longtime captain, forwards Valeri Nichushkin, Evan Rodgrigues and Darren Helm and defensemen Bowen Byram and Kurtis MacDermid and for a stretch were also without defenseman Samuel Girard.

Banged-up Colorado still rattled off eight wins in 10 games, though that wasn't any sort of boost for morale.

"We'd just rather have our team," MacKinnon said. "It's a lot more fun."

Hartnell, a 17-year veteran and now an NHL Network analyst, said little things like killing penalties and winning faceoffs are the areas play can dip when a team's depth is tested.

"The GMs and coaches, they're planning on having 95% of the team healthy, and when four or five guys go out, that 95% turns to 75, 65% of the team," Hartnell said. "And depending on how much money these guys are making, it adds up to a little bit more of a chunk of the pie that's missing."

It's a big chunk for the Flyers, who have not had No. 1 center Sean Couturier or potential top-pairing defenseman Ryan Ellis all season. They just got forward Scott Laughton back from a four-game absence but are still missing Cam Atkinson, Travis Konecny and James van Riemsdyk up front and went through a 10-game losing streak.

Before a recent game, first-year coach John Tortorella said his team as constructed was "not equipped to give things away for free." He has told his staff, "No matter what the lineup is, no matter how many losses and whatever happens with our record, you get up each and every morning and we're going to teach."

Indeed, in a season without playoff expectations Philadelphia has the opportunity for many young players to get on the ice.

"A lot of kids playing, which I think is terrific," Tortorella said. "We don't want to lose the games, but because of the situation we're in, the kids are getting more time than we thought right now, so you've got to look at the other side of it."