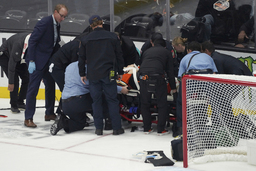 ANAHEIM, Calif. (AP) Ducks defenseman Urho Vaakanainen was taken off the Honda Center ice on a stretcher after he crashed into the end boards in the first period of Anaheim's preseason game against the San Jose Sharks on Friday night.

The Finnish defenseman was conscious and alert with full movement in his extremities at UCI Medical Center, the Ducks said.

The frightening incident occurred midway through the opening period when Vaakanainen smashed into the boards at a dangerous speed behind the Sharks' net. Vaakanainen appeared to be concentrating on the pass he had just made to Derek Grant, who scored the Ducks' opening goal on the assist.

Vaakanainen's teammates came onto the ice and gathered around him as he was taken away on the stretcher.

The Ducks acquired the 23-year-old Vaakanainen from Boston last March in the deal that sent longtime Ducks defenseman Hampus Lindholm to the Bruins. After recording two assists in 14 games for the Ducks last season, Vaakanainen is attempting to win a top-six role on Anaheim's defense this fall.