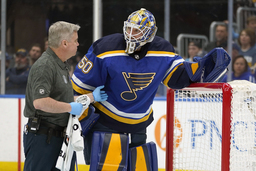 Binnington injured his left knee during a collision with Kadri and teammate Calle Rosen on May 21, left the ice and did not return for the rest of the series, which Colorado won in six games. Addressing reporters in St. Louis after doing end-of-season exit interviews, the 2019 Stanley Cup-winning netminder owned up to his role in the incident.

"I'm walking down the hallway, couldn't find a recycling bin on my way down the hallway, and right before I walked into the locker room I see him kind of doing an interview there, smiling, laughing, and I'm there in a knee brace limping down the hallway and I just felt like it was a God-given opportunity," Binnington said. "I could just stay silent and go in the room, or I could say something and just have him look me in the eye and understand what's going on: (Give him) something to think about."

Kadri at the time on TNT said, "I'm not sure if he just threw a water bottle at me or not." Binnington said the empty bottle "landed like two feet from" Kadri.

"It is what it is," Binnington said. "It's hockey. It's a competitive game."

The NHL looked into the water bottle toss and decided not to punish Binnington, who could have been subject to a fine.

Kadri was the subject of racist threats on social media in the aftermath of injuring Binnington, which caught the attention of the league and St. Louis Police and was condemned by the Avalanche and Blues. He recorded a hat trick the next game.