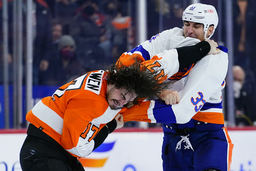 VOORHEES, N.J. (AP) The stirring "Rocky" soundtrack cranked full blast inside the Flyers' training complex seemed a strange dichotomy for a fallen franchise mired in the longest losing streak of its 54-year existence.

Then again, much like the fictional fighter, the Flyers' championship heyday peaked in the 1970s.

These Flyers are defined by losing, fan apathy and playing second string in their own building.

So with that as the backdrop, Flyers chairman Dave Scott had something to say:

"You deserve so much better than what we're dealing with right now. This isn't what anybody signed up for," he said Wednesday.

The Flyers are indeed sorry -- in a sorry state.

They are losers of a franchise-record 13 straight games and in last place (13-22-8) in the Metropolitan Division. The Flyers have lost four in a row in regulation, five away from matching the team record set in 2006. The Flyers also became the first team in NHL history to have a pair of 10-game losing streaks within the first 40 games of the season.

The first streak cost coach Alain Vigneault his job. Mike Yeo was named interim coach for the rest of the season and the Flyers will wait until the offseason to decide on a new coach.

But for the fans who have waited since 1975 to win a Stanley Cup, the wait will go on without bottoming out -- akin to fellow Wells Fargo Center tenant, and attendance sellout regulars, the 76ers and their Process.

"I don't really see this as being a three-, four-, five-year rebuild at all," Scott said.

Flyers fans on Twitter promptly broke out the rolled-eyes emoji.

"I'm going to give him a blank check," Scott said. "We're going to get this right. Whatever we need to do. Don't want to wait; want to deal with it now."

The Flyers are expected to have roughly $12.5 million in cap space this offseason, though that's factoring in pending free agent defenseman Rasmus Ristolainen and other players in need of a new contract.

With three months left in the season, the Flyers are playing out the string with an eye on next season, and a future that could be shaped by what Fletcher does at the March 21 trade deadline.

Flyers captain Claude Giroux, the longest-tenured player, is still having a fantastic season at 34 and leads the team with 15 goals and 34 points.

Giroux could waive his no-movement clause as he plays out the final months of his $66.2 million, eight-year contract and allow the Flyers to trade him for prospects and draft picks. Fletcher and Giroux's agent, Pat Brisson, met this week and will have more discussions about the All-Star's fate. Giroux's salary this season is only $5 million, which would make him easier for smaller-market teams to take on.

"Ultimately, that will be his decision," Fletcher said.

Fletcher acknowledged the Flyers need more "top-end talent" but raised eyebrows among the dwindling faithful when he said a "winning core" was already in place. There is? The Flyers have won just one playoff round and reached the postseason only four times since 2012.

They've churned through six coaches over that span, birthed Gritty, tore down the Kate Smith statue and had Jawn night.

But they didn't raise a banner.

Fletcher was hired in December 2018 to clean up a mess left behind from a halfhearted rebuild and poor draft picks from the previous regime. His moves have largely failed to pay off.

Scott, though, threw his full support behind Fletcher and said the GM -- who hired and fired Vigneault and had his 2021 offseason overhaul backfire -- made "some smart moves. I think we put a really strong roster together.

"Unfortunately, it didn't pan out for us."

As the losses piled up, so have the empty seats inside an arena once packed and crazed for every game. The cure all, of course, is winning, and should the Flyers blossom into contenders again, fans will show up in droves. Until then, the crowd for an opening faceoff will continue to look like the third period of a preseason game; the loudest noise from the boos at the end of the horn.

While a number of season-ticket holders and former players grumble about the disconnect from the days the late Ed Snider ran the ship, Scott said Comcast Spectacor has no interest in selling the team.

The Flyers are about miss the playoffs in consecutive years for the first time since a string of five straight absences from 1990-94. Perhaps they can cling to history as a guide -- the Flyers reached the Stanley Cup final in 1997. They haven't gone that far since a six-game loss to Chicago in 2010, when Giroux burst into a future star and so many brighter days seemed ahead.