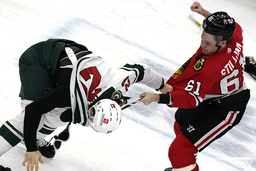 Khaira is dealing with a lower back issue. Stillman left Friday night's 5-1 loss to Minnesota with a left shoulder injury.

The move for Khaira, who has three goals and no assists in his first season with Chicago, was made retroactive to Monday.

The Blackhawks also added forward Brett Connolly to the active roster. Goaltender Cale Morris and defenseman Wyatt Kalynuk were recalled from Rockford of the American Hockey League and assigned to the taxi squad. Forward Mike Hardman was sent down to Rockford.