Cotter scores in shootout to lift Vegas past Columbus 3-2 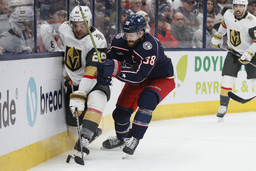 The shootout went four sudden-death rounds after each team scored once - Gustav Nyqvist for Columbus and Jonathan Marchessault for Vegas - in the first three rounds. Cotter, a second-year forward playing in his 21st career game, was the seventh player to shoot for Vegas and he beat goaltender Daniil Tarasov to end it.

"I was determined not to let in another goal, and I knew we were going to put one in," Vegas goalie Logan Thompson said.

"There's a lot of things in that game we can fix where we could have helped ourselves but at the end of the day it's very hard to win in this league," Vegas coach Bruce Cassidy said. "It doesn't matter who you play, where you play, so you enjoy the wins."

Johnny Gaudreau had a goal and an assist and Boone Jenner scored as Columbus rallied from a 2-0 deficit to force overtime. Nyqvist had two assists and Tarasov had 34 saves for the Eastern Conference-worst Blue Jackets, who have lost three straight at home.

Karlsson got credit for the game's first goal, which slid past Tarasov after going off the foot of Columbus' Jake Christiansen with 4:01 left in the first period. Carrier shot through a screen and made it 2-0 less than a minute later.

Vegas controlled the first period, but the second belonged to Columbus. Gaudreau scored on a one-timer off a pass from Nyqvist with 6:10 left in the period.

Jenner tied the game 2-2 with 7:49 remaining in the third, burying the rebound of a shot by Nyqvist.

KINGS OF THE ROAD

The Golden Knights' road record stands at 10-1-1, tied with New Jersey for the best in the NHL. It was the franchise's second win at Nationwide Arena and first since Nov. 5, 2019.

Vegas' Jack Eichel took a puck to the face in the third period, dripping blood as he quickly left the ice, but returned later in the period and took part in the shootout. ... Alex Pietrangelo missed the game for personal reasons.

Mathieu Olivier (illness) did not play for the Blue Jackets.

Vegas' Brayden McNabb played in career game No. 600 and notched his 100th career assist on Karlsson's goal. Will Carrier and Mark Stone marked 300 and 200 games, respectively, with the Golden Knights. Columbus' Cole Sillinger played in his 100th NHL game.

Gaudreau, who missed the morning skate due to sickness, has three goals and 11 assists in November. His helper on Jenner's goal tied the franchise record for assists in the month.

The Blue Jackets recalled defenseman Tim Berni from the AHL's Cleveland Monsters and sent Brendan Gaunce down to the minors. Berni, a native of Mannedorf, Switzerland, was selected by the Blue Jackets in the sixth round, 159th overall, of the 2018 draft.