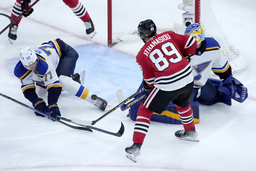 "It was only a matter of time," defenseman Nick Leddy said.

Ryan O'Reilly and Jordan Kyrou each had a goal and an assist, and St. Louis beat the Chicago Blackhawks 5-2 on Wednesday night for its fourth straight victory.

"We didn't play well, gave up a lot of goals in that tough stretch," Barbashev said. "But right now, it feels like it's getting back to normal."

Andreas Athanasiou scored twice for Chicago, and Arvid Soderblom made 30 stops. The Blackhawks (6-7-3) lost for the fourth time in five games.

"Anytime we had a bit of a mishap in the (defensive) zone or mess up on a 2-on-1 or give up a chance on our power play, then they buried it on us," coach Luke Richardson said. "And that's where we got to get a little better, to take advantage of the chances that we do get."

The teams combined for five goals during a wild second period.

After O'Reilly intercepted a Patrick Kane pass and knocked in his own rebound for a short-handed goal, Athanasiou responded with a power-play goal for his fifth of the season.

Pitlick then made it 4-2 when he beat Soderblom from the low right circle off a nice setup by Nikita Alexandrov at 11:37.

Kyrou helped St. Louis put it away when he sent Barbashev in on Soderblom for a mini-breakaway in the third period. Barbashev finished the drive with a slick move for his third goal, making it 5-2 at 6:55 and delighting the Blues moms in attendance as part of a team-organized trip.

"Usually not really good on the breakaways, but this one went in," Barbashev said.

St. Louis used a strong start to improve to 5-0-0 when leading after two periods.

Rosen got the Blues on the board when his shot from the high slot went off Blackhawks defenseman Alec Regula and into the net 14:09 into the first. Kyrou made it 2-0 with his sixth of the season 5:12 into the second.

Richardson said Seth Jones is "pretty much on schedule" in his recovery from a broken right thumb. The team's top defenseman got hurt when he was struck by a shot during an overtime loss at Buffalo on Oct. 29.

"I think he's still having some discomfort with that hand, hard passes and vibration, which is normal, so he's just getting his conditioning in right now," Richardson said. "We're not going to aggravate that too much, we're just going to let that heal for another week, 10 days before they do another X-ray."

Blues defenseman Colton Parayko was scratched with an unspecified injury, putting Tyler Tucker in the lineup for his NHL debut. ... Chicago forward Jason Dickinson returned to the lineup after missing two games because of an illness.

Blackhawks: At the Boston Bruins on Saturday night.