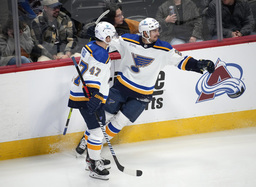 DENVER (AP) The St. Louis Blues felt the love from the crowd. Then again, their moms were cheering in the stands.

They were treated to quite a show, too, with plenty of drama at the end.

Brandon Saad scored a quirky goal in the second period to break a tie, Jordan Binnington stopped 45 shots and the Blues weathered a late 6-on-3 situation to beat the Colorado Avalanche 3-2 on Monday night.

Robert Thomas and Jordan Kyrou also scored for the Blues, who had their moms join them on the trip to Denver and Chicago.

"Your mom's the backbone of your childhood. They're there for you ever since you're a kid," Thomas said. "Pretty special to get a win in front of them."

St. Louis committed two late penalties - tripping and delay of game calls - to go down two skaters. And when the Avalanche pulled goalie Alexandar Georgiev for an extra attacker, the Blues dodged a 6-on-3 disadvantage for the final minute to win their third straight game.

"That's probably not the look you want to give up, especially against this team," Thomas said of going against the NHL's top power-play unit entering the game. "Can't give enough credit to those three guys out there and Binner. They did an amazing job."

On his goal, Saad was passing from down low when the puck deflected off the stick of defenseman Cale Makar and then bounced in past Georgiev's skate that was pressed against the post.

Mikko Rantanen and Artturi Lehkonen had goals for a banged-up Avalanche team that had won four in a row. Georgiev stopped 36 shots.

"They got a couple of lucky breaks. That's hockey," Makar said. "I feel like we did a lot of good things. We did the right things to win that game."

Fresh off being named the league's first star of the week, Rantanen scored the game's first goal on a feed from Nathan MacKinnon in the second period. Rantanen has 20 points at home this season, which leads the league.

Colorado's advantage didn't last long as Thomas tied it 2:20 later. He sped past MacKinnon to score on a shot that hit off the post, bounced down and appeared to be knocked in by Georgiev.

Kyrou gave the Blues a 3-1 lead with a power-play goal just 13 seconds into the third. The team has only four goals that were faster to start a third period, according to NHL Stats.

Lehkonen made it a one-goal game early in the third, but Binnington came up big by stopping 18 shots in the period.

"What a way to close it," Thomas said.

A back-and-forth first period featured a combined 28 saves from Binnington and Georgiev. But the best stop might have come from Kyrou when the Blues' center stuck out his skate to thwart a wraparound attempt from Evan Rodrigues.

The Blues took two penalties in the first period after being called for none over the last two games.

Blues coach Craig Berube doesn't spend much time wondering what could've been if only Binnington hadn't been hurt in Game 3 of a second-round playoff series against Colorado.

Binnington injured his left knee during a collision with Nazem Kadri and teammate Calle Rosen, left the ice and did not return for the rest of the series, which Colorado won in six games.

"I don't live in the past," Berube said. "They were the better team. So I don't really focus on that too much."

Makar had two assists to give him 198 career points in 192 games. He's trying to become the quickest defenseman to reach 200 points in NHL history.