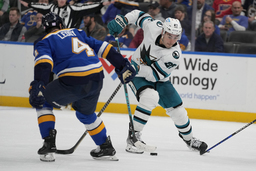 ST. LOUIS (AP) Calle Rosen had a goal and an assist as the St. Louis Blues ended their eight-game losing streak - the longest in franchise history - with a 5-3 win over the San Jose Sharks on Thursday night.

Rosen's first goal of the season broke a 3-all tie midway through the third period. Noel Acciari added an empty-netter.

"We definitely had a lot more pressure in the offensive zone and that's something that we keep having and that was definitely a good part of it today," Rosen said. "Obviously, we had to limit chances against, but I think it was a step in the right direction."

Torey Krug, Jordan Kyrou and Brandon Saad also scored for the Blues, who had gone four straight games with two goals or less. Jordan Binnington made 27 saves as St. Louis won for the first time since Oct. 22.

"We didn't beat ourselves tonight," Blues coach Craig Berube said. "They tied it up in the third, but we stayed with it and we kept battling."

St. Louis has won six straight against the Sharks and has points in the last eight meetings.

"Something we touched upon is playing the right way, grinding teams down, and we're going to have success. And even if it doesn't happen the first night, sticking with it," Saad said. "So, I think we did a good job of kind of wearing them down."

Timo Meier, Tomas Hertl and Logan Couture scored for the Sharks, who have lost five in a row (0-2-3). Kaapo Kahkonen made 28 saves.

"Just big-time mistakes ended up in our net and it's happening every single night," Couture said. "So we've got to find a way to avoid the big mistakes. Obviously, mistakes are going to happen throughout the game, but the big ones are killing us right now."

The Sharks tied it on a lucky bounce with 3:41 left in the first. Binnington made the initial save on Meier's deflection, but Blues defenseman Justin Faulk gloved the puck into the net while attempting to control the rebound.

Kyrou regained the lead for the Blues with a power-play goal at 6:59 of the second, burying a one-timer off a perfect feed from Pavel Buchnevich.

Hertl banged home a rebound to draw the Sharks even with 6:55 left in the second.

Saad's first goal of the season late in the second gave the Blues a 3-2 edge.

Couture's deflection of Eric Karlsson's shot tied the game for a third time early in the third period.

The Blues celebrated their annual Salute to Military Night.

Members of the Blues Warrior Team, made up of area disabled veterans, joined players on the ice for the national anthem.

Players wore military-themed warmup jerseys before the game that will be available through an online auction along with military mystery pucks, with proceeds going to Folds of Honor, H.E.R.O.E.S. Care and Blues Warrior hockey.

Hertl played in his 600th career game and is one point away from 400. ... Blues defenseman Niko Mikkola dressed in his 100th NHL game.

NOTES: Blues D Robert Bortuzzo (upper body) was placed on injured reserve after getting hurt Tuesday at Philadelphia. . Karlsson and Meier each extended their point streaks to six games. . Blues F Nikita Alexandrov made his NHL debut after being recalled from Springfield (AHL) along with F Josh Leivo on Wednesday. In corresponding moves, the Blues assigned F Jake Neighbours to Springfield and placed F Logan Brown on injured reserve with an upper-body injury.

Sharks: At the Dallas Stars on Friday night.

Blues: At the Vegas Golden Knights on Saturday night.