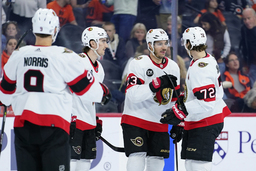 PHILADELPHIA (AP) Brady Tkachuk had a goal and an assist to lead the Ottawa Senators to a 4-2 victory over the Philadelphia Flyers on Friday night in the season finale for both teams.

Josh Norris and Travis Hamonic also scored and Austin Watson had an empty-netter for the Senators, who finished out of the playoffs for the fifth straight season.

Tkachuck reached the 30-goal plateau for the first time in his career with the eventual winning tally on a wrist shot on a power play with 3:22 left in regulation.

"Leave the season with a win, it's a good feeling," Tkachuk said. "You go into the summer feeling pretty good. What was most important is that everyone really left it out there and we gave it our absolute all. We're definitely happy with the outcome, and it leaves that kind of good taste in our mouth going into the summer."

James van Riemsdyk and Owen Tippett scored for the Flyers, who capped one of the worst seasons in franchise history. Boos reigned down as they skated off the ice.

"It sort of sums it up how many times have we had games similar to that," interim coach Mike Yeo said. "You battle, scratch and claw and then find our way to let it slip away at the end. It's disappointing."

Hamonic put the Senators ahead 2-1 1:56 into the final period on a slap shot, and Tippett tied it with Philadelphia's second tally on the man-advantage with 7:27 left in the third.

The Flyers' season was tumultuous on and off the ice. They finished with fewer victories in a full season only three other times, two of which came in the second and third year of the club's existence. They entered Friday with the worst power play in the league and third-worst goals per game.

"Motivation is not going to be an issue heading into next year," Yeo said.

They fired coach Alain Vigneault in December, replacing him with interim Mike Yeo; endured a pair of double-digit losing streaks, including a franchise-worst 13-game skid; got called out from prominent former players for sitting a healthy Keith Yandle earlier this month, ending his NHL-record 989-game ironman streak; and traded away longtime captain Claude Giroux in March.

Injuries only told part of the story for the Flyers, who got ineffective play from players up and down the lineup, many of whom regressed.