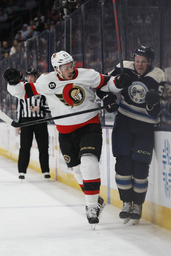 COLUMBUS, Ohio (AP) Tim Stutzle scored in the shootout to lift the Ottawa Senators to a 2-1 victory over the Columbus Blue Jackets on Friday night for their second straight road win.

"It felt like a little bit of a slow game, the two first periods, like we didn't really play our best game, offensively," Gustavsson said. "Then we did pretty good in the third period, and we came out of it with the win."

Roslovic put the Blue Jackets up 1-0 at 11:20 of the first, burying a tape-to-tape pass from Cole Sillinger from the right circle for his second power-play goal of the year.

"We had some looks," Blue Jackets coach Brad Larsen said. "We just couldn't get the next one."

Parker Kelly appeared to pull Ottawa even at 10:02 of the second but the goal was disallowed for offside.

Tkachuk finally put the Senators on the board at 7:06 of the third off tic-tac-toe passing from Drake Batherson and Josh Norris that caught Merlikins looking. The goal was Tkachuk's team-leading 61st point of the season.

"As the game went on, I thought we got a little hungrier," Ottawa coach D.J. Smith said. "It was a pretty even game both ways. We just found a way to win."

JACK OF ALL TRADES

The Blue Jackets announced in a pregame ceremony that Roslovic was the winner of the team's CBJ Community MVP honor for his work with Rosie's Gear for Goals, providing equipment for young players. Roslovic has eight goals and 10 points in his last six games.

With a goal against Columbus, Tkachuk has now recorded at least one point against each of the 31 NHL teams he has faced in his career. Through 40 road games this season, he maintains the club lead with 31 points away from home.

The Senators recalled forward Mark Kastelic from AHL Belleville. Kastelic has played 11 games for Ottawa this season in which he garnered two assists,

SCORELESS STREAK Oliver Bjorkstrand, Columbus' second leading scorer with 24 goals, has gone 11 straight games without picking up a point, more than twice as many games as any previous scoreless streak he's had this season.