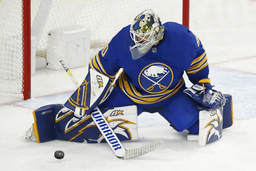 BUFFALO, N.Y. (AP) Dylan Larkin scored the tying goal in regulation and notched the game-winner 2:07 into overtime to give the Detroit Red Wings a 3-2 comeback win over the Buffalo Sabres on Monday before a sparse crowd in snowbound western New York.

"Very satisfying," Larkin said. "It's real nice to get this one done in overtime."

Vladislav Namestnikov added a short-handed goal for the Red Wings, who swept Buffalo in a home-and-home series to snap an 0-4-2 skid on the road and improve to 4-4-2 over the past 10 games. Alex Nedeljkovic made 26 saves.

"It's a huge two points to be able to come back," Detroit coach Jeff Blashill said. "Finding ways to win on the road can, for certain, breed confidence."

Not many witnessed the impressive comeback. Paid attendance was logged at 8,839, but a storm that dumped around 2 feet of snow in the region limited the crowd to around 1,000 at KeyBank Center.

"We knew it was going to be a tough game," Larkin said. "We come here, snowstorm and a lot of factors outside of hockey that we have to deal with. But I think you're seeing a common theme here with Ned showing up and bailing us out."

Henri Jokiharju and Jeff Skinner scored for the slumping Sabres, who have lost eight in a row at home and dropped to 1-5-3 in the last nine. The Sabres have lost all four meetings with the Red Wings this season. Aaron Dell stopped 32 shots.

Larkin's winning goal came on a wrist shot from the high slot after a giveaway by Jokiharju.

The Red Wings erased a 2-0 deficit with goals 2:07 apart in the third period.

Larkin skated off the bench to score his 17th on Robby Fabbri's feed from behind the net, tying the score at 2-2 with 6:32 left in regulation.

While the Red Wings were killing the penalty for a failed challenge of Skinner's goal, Moritz Seider set up Namestnikov on a 2-on-1 at 10:41 of the third. It was Namestnikov's 11th goal and Seider's team-leading 22nd assist.

"I thought that was the best third period we've played in a long time," Larkin said.

The Sabres went ahead 9:56 into the opening period when Jokiharju scored his second of the season on a snap shot from the left circle that went over the glove of Nedeljkovic, who was screened by two teammates and Buffalo's Alex Tuch.

Skinner scored his team-leading 14th goal at 9:41 of the third period. Blashill challenged that there was goaltender interference on the play, but the goal was upheld on replay.

"I thought it was close enough that the goal could come off the board," Blashill said. "But we have guys on the ice who are capable of scoring short-handed goals. It's huge to score a shorty. It was a big moment. And I thought it gave us a ton of energy."

Skinner lamented that the Sabres "had the lead, we had a power play, and we have to find a way to close those games out."

"The last thing we should be doing," coach Don Granato said, "is complicating things on the power play at that point. It should be simple and direct. The pain of it is something teams grow out of."

Tuch appeared to boost Buffalo's lead in the second period when he beat Nedeljkovic on the rush, but Blashill challenged the goal and video replay determined Tuch was offside.

Nedeljkovic stopped Tuch on a breakaway with three minutes remaining in the third.

Granato said he packed a shovel in his car and utilized four-wheel drive in making his way to the arena.

"I'm a little bit north of downtown and it just seemed like it was more and more snow as I went toward downtown," Granato said during his pregame media availability. "But made it here and, obviously, all the guys. So we're all in. Hockey, it's actually nice to see this stuff."

Sabres: Announced after the game that assistant Coach Jason Christie has been placed in the NHL's COVID-19 Protocol. ... Placed F Zemgus Girgensons (lower body), D Colin Murray (upper body), and G Ukko-Pekka Luukkonen (lower body) on injured reserve. . D Jacob Bryson (upper body) was scratched and will miss at least one more game after getting hurt in Saturday's loss. . D Mattias Samuelsson made his season debut after being called up from the minors, and F Peyton Krebs returned from missing four games while on the COVID-19 protocol list.

Sabres: At Ottawa Senators on Tuesday.