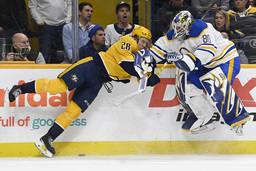 NASHVILLE, Tenn. (AP) Jeff Skinner scored twice and Aaron Dell made 29 saves to lead the Buffalo Sabres to a 4-1 victory over the Nashville Predators on Thursday night.

"Our guys deserved to win," Buffalo coach Don Granato said. "They worked for it. They earned it from the first drop of the puck all the way to the end."

Matt Duchene scored the lone goal and Juuse Saros made 17 saves for Nashville, which saw its five-game winning streak come to an end.

Dell stopped nine in the first, 12 in the second and eight in the third en route to recording his first victory of the season against five losses.

Jankowski was credited with scoring the game's first goal at 5:30 of the opening period.

Mark Pysyk's shot from the right point deflected off of Jankowski and then went on Nashville's net. Saros stopped the shot, but Predators defenseman Matt Benning's clearing attempt went off of Saros' right pad and into the net.

With Nashville on a power play, Duchene found a loose puck in the low slot and swatted it by Dell for his third power-play goal in two games.

Skinner scored his second of the game at 7:59 of the third after Nashville defensemen Roman Josi and Philippe Myers collided at center ice, allowing Skinner to skate in all alone and beat Saros with a wrist shot from the slot.

"It was my fault," Josi said. "I came off the bench. (Myers) was kind of backing up. I wanted to be aggressive, but I stepped right into him. He had his back to me, so it was my fault and we just couldn't get out fast enough."

Hinostroza added an empty-net goal with just over a minute remaining.

With his two-goal performance, Skinner reached the 500 point mark for his NHL career.

"It's cool," he said. "It's like a round number, so it's nice obviously. It's cool to sort of have that round number."

Skinner has enjoyed playing against the Predators, recording 11 goals and eight assists in 17 games against Nashville.

With under a minute remaining in the second period, Dell skated to the left wall to play a loose puck. Predators forward Eeli Tolvanen was skating down the wall in pursuit of the puck, and Dell leaned into the Finnish winger, knocking him to the ice. Dell was assessed a minor penalty for interference on the play. The penalty minutes were the first of Dell, playing in his 122nd career NHL game.

"It was a funny penalty," Granato said. "I love the aggression on his side."

Later in the game, Dell drew a penalty against Nashville rookie Tanner Jeannot, who drove toward the Buffalo net and collided with the goaltender.

With an assist on Duchene's first period power-play goal, Josi extended his point-scoring streak to four games. Over that stretch, the defenseman has a goal and eight assists.

His 38 points on the season lead the Predators.

Sabres: Visits Detroit Saturday in the front end of a home-and-home set with the Red Wings.