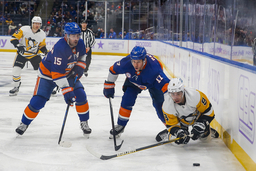 Pittsburgh won its fifth straight, with Jarry driving the hot streak. His shaky play cost the Penguins in a six-game first-round playoff loss to the Islanders in May, but he's allowed two goals over his last five starts and is 5-1-1 on the road this season.

"He's continuing to grow as a player and as a person," Penguins coach Mike Sullivan said. "I think he's worked extremely hard in the offseason and throughout training camp to be successful. I'm sure he found some satisfaction in this one tonight."

Kapanen took a pass from captain Sidney Crosby and rifled a high shot from the left faceoff circle past goalie Ilya Sorokin at 16:41 of the second period for his fifth of the season.

Jake Guentzel also assisted to extend his points streak to eight games. Guentzel has five goals and four assists over that span and has at least one point in 11 of his last 12 games.

"I thought our team played hard. We had a great start. It started with the very first shift," Sullivan said. "I really liked the energy we came with. For the most part, we sustained it through 60 minutes."

Jarry denied Kyle Palmieri on a high shot at 8:29 of second and made a nifty glove save on Casey Cizikas' backhand at 3:39 of the third. He also stopped Otto Koivula point-blank late in the third.

"He's doing it all. He's tracking the puck and playing really well," Guentzel said. "He gives us confidence the way he's playing. It's pretty special to see."

The Islanders lost for the eighth straight time in regulation and lost their fourth in a row to open UBS Arena.

"Obviously it isn't going our way right now but the effort is definitely there," Islanders veteran Matt Martin said. "Guys are grinding away. We just can't seem to get that goal. Brighter days are ahead. We have to will our way and hopefully take it from there."

The Islanders, who were 5-6-2 on a season-opening 13-game road trip, have been outscored 32-7 during the eight-game losing streak.

Sorokin made 29 saves for the Islanders, who last won Nov. 6 at Winnipeg, when he blanked the Jets 2-0.

It is the first time in franchise history the Islanders have started a season 0-4 at home.

"We know our crowd can propel us forward and we haven't given them a whole lot," Martin said.

The Islanders are without seven players because of COVID-19 protocols, including captain Anders Lee and top scorer Josh Bailey.

"Our team does care and we have a lot of great indiviiduals," Islanders coach Barry Trotz said. "That room is battling. There is something to be said about that."

The contest was the first meeting of the teams since the Islanders eliminated Pittsburgh from the playoffs before a raucous crowd at Nassau Coliseum on May 26.

Friday night's result was a far cry from that 5-3 Game 6 victory before a frenzied home crowd.

Jarry downplayed the significance of beating the Islanders after the way Pittsburgh's season ended six months ago to the day.

"It's just another game," he said. "It's a new game, a new team, a new mindset. I just want to play my best hockey and get better every day."

This time, the Islanders heard boos when they failed to generate pressure during a second-period power play and during another man advantage seven minutes into the third, during which Jarry denied Oliver Wahlstrom on a one-timer, then stopped Sebastian Aho.

"The try is there. The compete is there," Trotz said. "The worst thing is for a player to have quit in his game and I don't see any of that."

The Islanders came into the contest 5-0-4 in their last nine home games against Pittsburgh in the regular season and had won four of five home playoff games in that span.

Martin said the Islanders may simply need a fortuitous break in their favor to help them feel collectively better.

"I don't anyone thinks the season is over," he said. "We're snakebitten. We just have to stick with it. Everybody is working hard. Sometimes you have to will your way to one and the bounces come."

Pittsburgh's league-best penalty kill has killed 15 straight penalties over six games. ... The Islanders have been outscored 3 to 1 on their own power play in November in 29 opportunities.