Kaprizov gets goal, 3 assists in 7-2 romp for Wild vs. Stars 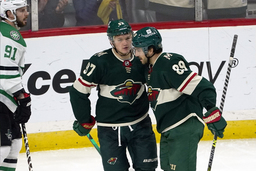 ST. PAUL, Minn. (AP) Though the goals haven't come as frequently for Kirill Kaprizov thus far in his rookie-of-the-year follow-up, the multi-skilled left wing has still been a significant contributor for Minnesota.

Temporarily moved down to the third line on Thursday night to help give the Wild offense a jolt, Kaprizov broke out in a big way with a career-best four points.

Kaprizov had a goal and three assists for the Wild, who used a four-goal third period to spoil Dallas defenseman Ryan Suter's return with a 7-2 victory over the Stars.

Mats Zuccarello and Alex Goligoski each had a goal and two assists, and Victor Rask had a goal and an assist for Minnesota. Rem Pitlick, Ryan Hartman and Frederick Gaudreau also scored as the Wild had at least one point from 11 of their 12 forwards in their season-high goal total.

Kaprizov left his usual linemates Hartman and Zuccarello and joined Rask and Gaudreau in what became an equally potent trio against the Stars.

"Talking about him squeezing his stick and struggling, he's a hard worker every time he gets on the ice," Zuccarello said. "Sometimes you have to see beyond the goals and assists and see what he creates and how hard he works for the team."

In a rare postgame interview, with his Russian translator listening by phone, Kaprizov acknowledged the line switch was a wakeup call for him and Zuccarello. Ironically, Kaprizov's goal came on an assist from Zuccarello when a post-power-play scramble left both of them on the ice at the same time, like usual.

"I definitely think it was a little bit of a signal," Kaprizov said through his translator. "I think both of us went out there and played our game, played the best we could, and it just so happened that both of us ended up getting some points together. So it worked out."

Said coach Dean Evason: "We were trying to send a message to the whole group that they can play with anybody. It's not an individual message. It's a team message."

After getting 27 goals and 24 assists in 55 games last season on his way to the Calder Trophy, Kaprizov has four goals and 11 assists in 16 games this season.

"I think he's been playing great hockey. He's been solid. He stuck with it, doing the right things, and that's what matters," Gaudreau said.

Jacob Peterson and Jamie Benn scored in the third period for the Stars, who fell apart down the stretch and pulled goalie Anton Khudobin after Zuccarello and Rask scored 45 seconds apart to push Minnesota's lead to five. Jake Oettinger relieved Khudobin, the former Wild prospect, for some mop-up duty in his home state.

Cam Talbot was working on his first shutout of the season when Peterson cut the lead to 3-1 with an extra-effort goal at 3:50 of the third period after his first shot attempt was blocked.

The Stars went on the power play a minute later, but 25 seconds after it expired Goligoski grabbed the momentum back for Minnesota with his slap shot against the team he spent more than a third of his 14-year career with. Talbot, who has started 13 of Minnesota's 16 games, stopped 36 shots.

After an uneven start to the season, the Stars looked like they had some momentum going into this game, too, with consecutive 5-2 victories over Philadelphia and Detroit. They never quite matched Minnesota's attack, though, and fell behind 2-0 in the first period.

Kaprizov got the second one for the Wild, his fourth of the season on a one-timer off a slick pass from Zuccarello. Hartman added his team-leading eighth goal with 1:01 left in the second period.

"We never really got to our game. They played well. First couple of goals we kind of gave them, turning pucks over, fly-bys, and were never really able to get the momentum back," Suter said. "Shame on us for not playing well."

Just as they did for Zach Parise when the veteran left wing returned to Minnesota 11 days ago with the New York Islanders, the Wild played a highlight video of Suter's time with the team during the first TV timeout of the first period. Suter waved and smiled to the fans he grew so fond of over nine seasons in Minnesota. The Wild bought out his and Parise's contracts this summer.

"I'll always have a place in my heart for Minnesota, the people here. It was pretty cool," Suter said.

The Stars start a three-game homestand by hosting St. Louis on Saturday.

The Wild begin a three-game trip at Florida on Saturday.