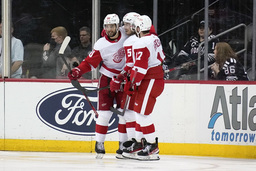 Tyler Bertuzzi and Michael Rasmussen each had a goal and an assist, and Moritz Seider and Joe Veleno also scored for the Red Wings (32-40-10). Sam Gagner had two assists and Magnus Hellberg stopped 23 shots.

Suter's goal with 9:27 left gave Detroit it's fourth lead of the game, and Bertuzzi added an empty-netter, his 30th goal of the season, with 10 seconds to go to seal the win.

"Happy for Bert(uzzi) that he got his 30th. Happy for Magnus to step in and win a game after being with us. I thought that was great. Obviously, (Mortiz) Seid(er) gets his 50th point," Detroit coach Jeff Blashill said. "Other than that, obviously, it's way better to walk into the locker room after a win."

Seider was the fifth rookie defenseman in the last 32 years to record 50 points, while Hellberg made his Red Wings debut. It was the 31-year-old netminder's fifth NHL game, earning his first win since 2017 with the Rangers. He signed with Detroit from the KHL in mid-April.

"I felt pretty good right off the bat there," Hellberg said. "Obviously, it's been a while since I played. I think it's been two and a half months - but it was good. The guys played well in front of me. Let me see the pucks."

Fabian Zetterlund had a goal and an assist, and Dawson Mercer and Nolan Foote also scored for the Devils (27-46-9), who closed the season with six straight losses (0-4-2) overall and eight straight at home. Mackenzie Blackwood finished with 30 saves.

Veleno scored his eighth 54 seconds into the third period to give Detroit a 3-2 lead before Zetterlund tied it for the third time just over 6 minutes later with his third.

Rasmussen scored at 1:08 of the first period to give the Red Wings the 1-0 lead with his 15th.

Mercer answered for the Devils when Zetterlund found him at the front of the net with 2:46 left in the opening period to tie it. It was Mercer's 17th.

Seider scored with a wrist shot from the top of the point at 6:30 of the second to retake the lead for the Red Wings. It was his seventh.

Foote tied it for the Devils with his third with 4:22 remaining in the period.