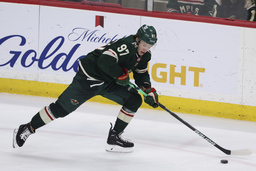 ST. PAUL, Minn. (AP) Kirill Kaprizov had a goal and three assists to become the first player in Minnesota franchise history with at least 100 points in a season, and the Wild established four franchise records and tied another in beating Seattle 6-3 Friday night.

Joel Eriksson Ek had two goals and an assist, Mats Zuccarello, Ryan Hartman and Nicolas Deslauriers also scored, and Kevin Fiala had a team-record five assists for Minnesota, which also established all-time bests with its 50th win and 107 points.

"There were a lot of different things that happened tonight as far as individual milestones and all that kind of stuff. But our group doesn't really care about that," said Wild coach Dean Evason. "Kirill and Kevin were more excited when D-Lo scored than anything, right? That shows you the group is really tight and playing for the right reasons."

Marc-Andre Fleury overcame an early gaffe and had 25 saves to improve to 7-1-0 since being acquired from Chicago at the trade deadline.

Matty Beniers also scored for the Kraken to become the first rookie to begin his NHL career with points in five consecutive games since New Jersey's Ty Smith Jan. 14-24, 2021.

Tying his career-high with four points, Kaprizov has 45 goals and 56 assists for the Wild, winners of four straight and 7-0-2 in their past nine games. Minnesota is 16-1-3 in its past 20 outings, outscoring opponents 77-48 while scoring at least three goals in 18 of those games.

"For me, obviously it's a huge accomplishment . but at the end of the day, we need to focus, we have playoffs coming up and it's about getting better every single game and continuing this momentum," Kaprizov said through an interpreter.

Minnesota, which holds a two-point advantage over St. Louis for second place in the Central Division, is 29-6-2 at Xcel Energy Center. The teams are locked into a first-round playoff matchup.

Down 2-1 after one period, Fiala attracted three defenders before feeding Eriksson Ek for his second goal of the game early in the second.

Minnesota then scored four times in a 7:37 stretch.

Kaprizov redirected Fiala's shot past Grubauer, and Hartman scored short side to make it 4-2. Fiala and Kaprizov got assists on Zuccarello's goal before Deslauriers scored on his own rebound.

Kaprizov and Zuccarello goals came on the power play, as did Eriksson Ek's first goal. The Wild tied a season-high with three man-advantage goals.

"The second period they were a team that was playing for a playoff position and seeding, and they played for real. We played 20 minutes of shinny hockey. That's the bottom line," said Seattle coach Dave Hakstol, who was most displeased with bad turnovers.

"I think a lot of their offense was self-inflicted. We kind of gave it to them," Beniers said.

Fiala is on a four-game multi-point streak and has nine goals and 12 assists in a nine-game scoring stretch.

"If you're a player and you think about the points stuff, the points are not coming," Fiala said. "I just come here have fun with the guys try to play the game like in present you know, instinct and, and everything settles."

Matt Boldy had an assist to extend his official career-high point streak to eight games, surpassing Marian Gaborik's rookie record of seven. Boldy has points in his last 10 games; however, he missed four games with an injury after the first two.

NOTES: Zuccarello (lower body) did not play in the third period and will not play Sunday as a precautionary measure. ... Minnesota C Tyson Jost (lower body) returned after missing three games. ... Seattle signed D Ryker Evans to a three-year, entry-level contract. The team's second-round pick in the 2021 Draft, Evans had Western Hockey League career highs with 14 goals, 47 assists and 61 points this season.

Kraken: At Dallas on Saturday.

Wild: At Nashville on Sunday.