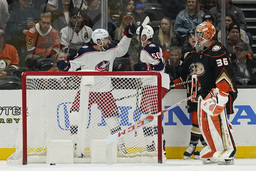 Gerry Mayhew, Cam Fowler and Derek Grant also scored and John Gibson made 29 saves for the Ducks, who earned a point for the third straight game.

"I thought we made a lot of good scoring plays that sometimes haven't been there for us," Terry said. "It was kind of one of those games that we're not in very often where it's pretty open and back and forth, just the way they were playing."

Jake Bean scored twice for the Blue Jackets, while Sean Kuraly and Cole Sillinger each had a goal. Columbus, though, has lost the first two on its three-game California trip. Jean-Francois Berube made 26 saves.

"We did generate a lot," Bean said. "I guess we just got to keep that going on the offensive side of things and just try to be a little bit more responsible again in our D-zone."

Anaheim broke a 3-all tie when Zegras finished off a two-on-one from Grant a minute into the third, getting his 57th point to tie Bobby Ryan (2008-09) for points by a Ducks rookie.

"When you're playing with good players, it's kind of easy to find those spots," Zegras said. "Grant put it right on my tape. That was probably the easiest goal I've ever scored in my life, so cheers to him for that one."

Grant put in an empty-netter with 55.4 seconds remaining.

The Ducks scored on three of their first five shots to take a 3-1 lead. Terry had the first two, burying a one-timer from Ryan Getzlaf for the opener at 3:17 and putting in his own rebound from close range to make it 2-1 at 5:43. He has five goals in his past three games.

"If you have a good first shift or good first couple shifts, you just feel more confident with the puck," Terry said. "I'm sure you can see it in guys when they score early. They're moving faster, their legs feel a little lighter."

Terry is up to 36 goals in his breakthrough season, giving him a chance to become Anaheim's first 40-goal scorer since Corey Perry had 43 in 2013-14.

Zegras set up the other goal, getting the 36th assist of his Calder Trophy-caliber campaign when he found Mayhew for an easy tap-in at 7:42.

Anaheim's only mistake in the first came on a bad line change that allowed Bean to charge in from the blue line for his sixth goal at 4:07.

The Blue Jackets rallied in the second period to tie it at 3. Bean blasted a shot through traffic to pull within a goal at 1:34 for his second career multigoal game. It was also his second multigoal game of the season, the first being two at Colorado on Nov. 3.

Kuraly scored into an open net off Eric Robinson's pass after the strong forechecking of Justin Danforth forced a turnover in the offensive zone, tying it up midway through the second.

"We've kind of played from behind quite a bit, which is good to know that you can play from behind and get back in games. But, sooner or later, we're gonna have to start playing from in front if we want to be a serious contender," Bean said.

NOTES: Blue Jackets defenseman Zach Werenski did not return after sustaining an upper-body injury in the first period. He appeared to have been hurt checking Ducks forward Sam Carrick into the boards 2:50 into the game. ... Blue Jackets forward Patrik Laine, who leads the team with 26 goals and 56 points, did not play because of an upper-body injury and is day-to-day. . Fowler, who also had an assist, set a new career-high with 41 points this season. . Getzlaf had two assists, bringing him to 1,017 points as he nears the end of his illustrious career.