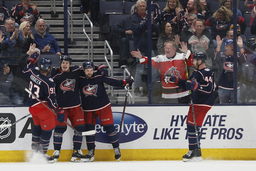 COLUMBUS, Ohio (AP) Jack Roslovic scored twice, Patrik Laine had a goal and two assists and the Columbus Blue Jackets beat Montreal 5-1 on Wednesday night for their second straight win and a three-game season sweep of the Canadiens.

Cole Sillinger and Emil Bemstrom each added a goal and an assist, and Gus Nyquist and Jakub Voracek both had two assists for Columbus. Elvis Merzlikins stopped 20 shots on his 28th birthday to help lead the Blue Jackets over Montreal for the seventh time in eight home meetings.

Columbus got on the scoreboard first after Montembeault bobbled the rebound of Roslovic's shot, which trickled past him over the goal line at 8:36 of the first period.

Roslovic's second goal, his fifth in two games, came off the rush as he slid it under Montembeault's pad on the glove side at 15:52 of the second.

"Sometimes you get the bounces," Blue Jackets coach Brad Larsen said. "I'm sure their goalie would like that one back. It's great to see (Roslovic) get on the board for us and get another couple. Hopefully he will keep riding that for us."

Laine made it 3-0 1:30 later with his fifth power-play goal of the season, snapping a 10-game scoring drought.

Poehling pulled Montreal to within two with 1:51 left in the second, deflecting Nick Suzuki's shot, eight seconds into a Canadiens power play, for his first goal since Jan. 17.

Sillinger's deflection at 6:24 of the third made it 4-1. The secondary assist from Nick Blankenburg marked his first NHL point in his league debut.

"There was a sense of relief when I saw it go in," Blankenburg said. "I'm kind of at a loss of words. It's a childhood dream to play your first game in the NHL, let alone get your first point."

"I'm sure I'll find some positive things, but right now we don't feel very good about the game because of the result," Canadiens coach Martin St. Louis said. "I know our effort was not where it needed to be. I'm sure there will be some positives there, but I'm not sure what they are yet."

WELCOME TO THE PROS

In addition to Blankenburg, the game also marked the NHL debut of his University of Michigan teammate, Blue Jackets first-round pick Kent Johnson. Johnson, the fifth overall choice in the 2021 draft, signed a three-year entry level deal after the Wolverines were eliminated by eventual champion Denver. Blankenburg signed a one-year, entry level contract for the remainder of the 2021-22 season.

Laine suited up for the 100th game of his Blue Jackets career, while Zach Werenski played in his 400th NHL game, all for Columbus.

Nick Suzuki's assist on Poehling's goal was his team-leading 37th of the season, and extended his point and assist streak to four games.

Former Blue Jacket Josh Anderson played his first game at Nationwide Arena since being traded to the Canadiens in 2020. Also making his return to Columbus was David Savard, who spent parts of 10 seasons with the Blue Jackets before being traded to Tampa Bay in 2021, where he won a Stanley Cup. He signed a four-year deal with Montreal in the summer of 2021.

The Canadiens second-period power-play goal was its first off Columbus since March 12, 2018.