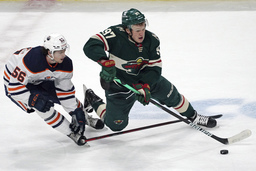 ST. PAUL, Minn. (AP) Kevin Fiala and Ryan Hartman each scored twice, and the Minnesota Wild beat the Edmonton Oilers 5-1 on Tuesday night in a matchup of two of the NHL's hottest teams.

Frederick Gaudreau also scored for Minnesota, which improved to 11-1-2 in its last 14 games. The Wild have scored at least three goals in all but one of those contests.

Tied with St. Louis for second place in the Central Division with a game in hand, Minnesota is 9-0-1 in its past 10 home games.

"They've got probably the two best players in the league and when you play them, you have to be ready on the ice. We just tried to play them hard," said Wild defenseman Jonas Brodin, who shadowed Connor McDavid much of the night. McDavid was held without a point for the second straight game, the fourth time that has happened this season.

Leon Draisaitl scored on the power play for Edmonton, his career-high 51st goal of the year and 21st with the man advantage, setting a franchise high. Wayne Gretzky (1983-84) and Ryan Smyth (1996-97) had the previous record.

Edmonton, 6-0-1 in its previous seven games, got 18 saves from Mikko Koskinen.

"We thought we were the authors of a lot of the chances against," Edmonton coach Jay Woodcroft said.

Fiala forced a turnover early in the second period, and a couple passes later, converted a feed from Matt Boldy for a 2-0 lead. Midway through the frame, an aggressive forecheck led to another Edmonton turnover and Fiala took advantage by beating Koskinen top shelf from near the goal line.

"We've talked about it the whole season - just dislodge the puck and get everybody around the puck and win the pucks back. Tonight, we saw a lot of that," said Fiala who has a career-high 26 goals this year.

A trio of Edmonton miscues resulted in a pass from Kirill Kaprizov to Hartman in front, and he lofted a shot over Koskinen less than 4 minutes later. Hartman scored his 29th of the year early in the third.

Kaprizov assisted on both Hartman goals to push his season total to 91 points - 42 goals and 49 assists.

Evander Kane cross-checked Kaprizov midway through the third period and was quickly surrounded by five Wild players before Hartman jumped at him during a scrap. Both earned roughing minors and 10-minute misconducts.

"He gave Kirill a shot from behind in a very vulnerable spot," said Hartman, who is likely to get fined for flipping off Kane. "It goes to show, we had five guys in there. They didn't have one guy in there to help him."

"Yeah, these little guys, they wanna act tough but they wait for the linesman to come in," Kane said.

Gaudreau scored early for a 1-0 lead. Minnesota is 27-1-1 when leading after the first period.

"We're in on pucks. We're dislodging. We're having good sticks and we're getting opportunities because of it and not only in the offensive zone but in the defensive zone, too," Wild coach Dean Evason said. "We exited real well. They had a couple of sustained shifts, but for the most part we did a lot of real good things."

Minnesota is 26-6-1 in the last 33 games against Edmonton at Xcel Energy Center dating to Feb. 25, 2007. ... Wild LW Jordan Greenway left in the first period with an upper-body injury. Evason said he's unlikely to be on the team's upcoming two-game trip. ... Edmonton killed off all three Wild power-play chances and is 17 of 18 on penalty kills the past seven games.

Oilers: At Nashville on Thursday.

Wild: At Dallas on Thursday.