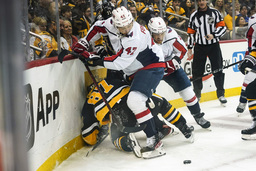 Wilson's decision to shoot, rather than pass to the greatest goal scorer of this generation, gave the Capitals one of their most important wins of the season.

Wilson broke a tie with 8:25 left and the Capitals beat the Pittsburgh Penguins 6-3 on Saturday.

"That's always my first thought, is to try to get it over to (Ovechkin)," Wilson said. "But I thought it was honestly probably going to be a tougher pass than shot. So I just decided to shoot it. Got lucky at a fortunate time of the game."

Ovechkin tied it for Washington on a power play at 4:49 of the third period with his 44th goal of the season, and Wilson matched his career high with his 22nd - sending a wrist shot over Tristan Jarry's glove from the left circle.

The Capitals have won two second straight to move four points behind Pittsburgh for third place in the Metropolitan Division. Washington has won five road games in a row, one shy of equaling the franchise record.

"Just coming out to the bench in the first period, it had a playoff feel to it," Capitals coach Peter Laviolette said. "Our guys were ready."

Bryan Rust, Jeff Carter and Brian Boyle scored for Pittsburgh, and Jarry made 39 saves. The Penguins have lost four in a row and seven of nine.

"We weren't good enough," Penguins coach Mike Sullivan said. "We didn't execute. We were careless with the puck. We beat ourselves in a lot of ways. Give Washington credit."

Pittsburgh had a late power-play, but Kuznetsov scored an empty-net goal with 1:41 left to put the game away. Kuznetsov has points in 15 of his last 16 games. The Capitals are 32-13-4 when Kuznetsov records a point this season.

"That felt like a playoff atmosphere," Wilson said. "The rink was loud and there was a lot of energy. To come together and play well in that type of game is encouraging."

Crosby and Ovechkin faced one another for the 62nd time head-to-head. Crosby and the Penguins have gone 36-23-3 against Ovechkin and the Capitals in 17 seasons.

NOTES: Crosby and D John Marino played after missing sitting out Thursday night against the New York Rangers with a non-COVID-related illness. . Pittsburgh F Jason Zucker also returned after missing the last three games. He's missed 40 of the last 42 games. . Capitals F Conor Sheary, who once played with Pittsburgh, missed Saturday's game with a non-COVID-related illness. . Ovechkin has 12 goals in his last 16 games. . Malkin has points in five straight home games. . Boyle has points in a career-high seven straight home games. . The Penguins had a moment of silence before the game to honor Pittsburgh Steelers' quarterback Dwayne Haskins. He was killed earlier in the day when he was hit by a dump truck while walking a South Florida highway.