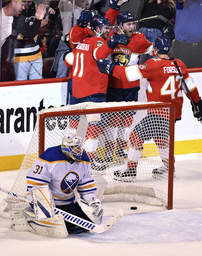 SUNRISE, Fla- (AP) Sam Bennett scored with 37.3 seconds left to lift the Florida Panthers to a 4-3 win over the Buffalo Sabres on Friday night.

Sam Reinhart and Claude Giroux each had a goal and an assist, and Patric Hornqvist also scored for the Panthers. Sergei Bobrovsky made 19 saves.

Aleksander Barkov passed from the left circle to Bennett in front and he poked the puck in the net to cap a comeback from a 3-1 deficit. The Panthers won their 30th home game of the season, extending the franchise record, and got their team-record 50th win of season.

"When you're on the ice with those two guys, (Huberdeau and Barkov) usually something special is going to happen," Bennett said. "They made great plays and then it was easy for me to just sit backdoor and Barky got it over to me."

Hornqvist trimmed the score to 3-2 when he banked the puck from behind the net off Tokarski's back and in with 10:30 left in the second. Then Reinhart tied the score at 3 on his power-play goal with 5:40 left in the period.

"The start wasn't ideal," interim coach Andrew Brunette said. "We kind of felt our way through the first period a little bit. I thought we started taking over in the second. A little concerning getting down 3-1, I don't think we played poorly, but maybe not the level we normally play."

The Sabres scored three goals on their first nine shots.

Giroux took a pass from Huberdeau at the goal line and his sharp-angle shot beat Tokarski at 8:25 on the power play to make it 1-all.

The Sabres took a 2-1 lead 20 seconds later on Pysyk's goal. Skinner stretched the Sabres lead to 3-1 on his backhanded goal with 4:25 left in the first.

"We blow the opportunity to get two points or bring it to overtime for one point. It's frustrating," coach Don Granato said. "It's a lost game in the last minute, but the silver lining is our guys will grow from it."

Defenseman Rasmus Dahlin couldn't clear the puck out of the zone in the final minute, setting up the winning scoring chance.

"It's my bad I can't do that. I thought I made a good play, to keep it simple," Dahlin said. "The game went back and forth. It's not the result I wanted or the team wanted."

The Panthers have been favored by oddsmakers in all 36 of their home games this season. Since betting data began being tracked nine years ago, there has never been a season was Florida was favored on home ice in every game. Friday marked Florida's 65th time as a favorite in 71 games overall this season.

NOTES: Sabres C Cody Eaking played his 700th NHL game. ... The Sabres signed D Owen Power, the No. 1 pick of the 2021 NHL Draft, to a three-year entry-level contract on Friday. "He's going to be a great player for us, we're excited for him to join us," said forward Jeff Skinner ... Buffalo's game at Tampa Bay on Sunday is the Sabres' first visit to that rink since November 2019. The Sabres haven't won at Tampa Bay since 2018 and haven't won there in regulation since 2015. ... The Panthers have had seven different winning streaks of at least four games.

Sabres: At Tampa Bay on Sunday.

Panthers: At Nashville on Saturday.