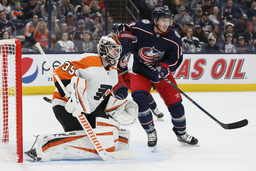 Travis Konecny added a goal in the third period, Martin Jones stopped 26 shots and Kevin Hayes had a pair of assists for Philadelphia, which has won two of its last three games overall.

"One of the things we talked about before the game was we had to be better in the neutral zone," Flyers interim head coach Mike Yeo said. "I thought we did a good job of that, whether it's executing and finding a way to get into the offensive zone and playing in the offensive zone, or whether it's tracking and not allowing those teams to get to their game."

Robinson put the Blue Jackets on the scoreboard with his second short-handed goal of the season, just 19 seconds into a power play for the Flyers at 15:06 of the first period.

With Philadelphia trailing 1-0, Connauton tied it at the 12-minute mark of the second period with an unassisted sniper shot from the left circle for his first goal of the season.

The Flyers took the lead 1:26 later when Tippett pounced on a puck that rebounded off the boards and he wristed it from the slot for his second goal since coming to Philadelphia from Florida in the trade for Claude Giroux.

"When you get chances and they don't go in, it's easy to get frustrated," Tippett said. "When you are getting chances, you know one is coming. When one goes in and squeaks in like tonight, it's a good feeling."

Another bounce off the boards at 16:41 landed on the stick of the rookie Cates, who shoveled it past Merzlikins for his second career goal - both against the Blue Jackets - in his nine-day, five-game NHL career.

"I didn't know how far that puck is going to bounce out in front," Cates said. "I don't know if I was going to have to go behind the net or kind of stuff it like I did, but it was pretty fortuitous it bounced pretty far out and I just kind of chipped it in. It was kind of a weird goal, kind of lucky one, but I'll take it."

"We were lifeless tonight - all the way through," Blue Jackets coach Brad Larsen said. "I didn't like us at all. No excuses tonight. We were not engaged in that game at all - nowhere near where we needed to be."

Cam Atkinson returned to Columbus for the first time since being traded to the Flyers in an offseason swap for Jakub Voracek. A fan favorite during his decade with the Blue Jackets, Atkinson's 627 games played, 213 goals and 402 points rank second in franchise history behind Rick Nash. Atkinson's 16 short-handed goals during his Blue Jackets career were the most in team history.

Center Scott Laughton returned to the Flyers lineup after missing 12 games with a concussion.

Connauton's goal was his first since Feb. 4, 2019, when he played for Arizona.

SEE YOU IN C-BUS

The Flyers made their first visit to Columbus in more than two years, having last played in Ohio's capital on Feb. 20, 2020.

THREE IS A CHARM

In 10 of the last 11 times the Flyers and Blue Jackets faced off, the winning team scored three-plus goals.

Blue Jackets leading scorer Patrik Laine extended his season-longest scoring slump, failing to find the back of the net in his last nine games.

Robinson describing Atkinson: "He's the type of pro you want to be."