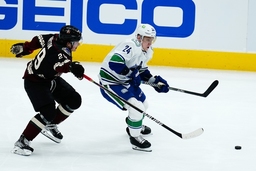 GLENDALE, Ariz. (AP) Bo Horvat and Alex Chiasson each had two goals and an assist and the Vancouver Canucks continued a late playoff push with a 5-1 victory over the Arizona Coyotes on Thursday night.

Elias Pettersson had a goal and two assists for the Canucks, who have won two straight and earned five points in their last three games.

Horvat has his first 30-goal season and has four goals in his last three games and 13 in his last 16. Pettersson had two goals in a 5-1 victory at Vegas on Wednesday and has 13 points in his last eight games.

"Just getting all the right bounces and trying to finish as best I can," Horvat said. "Thankfully they've been going in for me. I am playing with confidence and definitely feel good with the puck night-in and night-out, but at the same time getting the wins are more important for sure."

The Canucks have 78 points, six behind Dallas for the second wild card in the Western Conference with 10 games to play. Las Vegas has 82 points. The Stars have two games in hand on both.

Nick Schmaltz scored his career-high 22nd goal for the Coyotes, who have lost nine of 11. Harri Sateri made 27 saves in his first game with Arizona and his 10th in the NHL, his first since Feb. 9, 2018, while with Florida. He was claimed off waivers from Toronto on March 21.

Horvat scored 38 seconds apart early in the Canucks' three-goal second period for a 3-0 lead. He was 17 of 17 on faceoffs.

Chiasson opened and closed the scoring with power-play goals in the first and third periods, and Pettersson took a feed from Chiasson to score into an open net on a two-on-none break for for 4-1 lead at 11:12 of the second period.

"Obviously, we are going through a big push for our team, and it's nice to be part of a little bit of the success," Chiasson said.

"We probably weren't as sharp as we were last night, but we got off to a good start. Have to find ways to get points at this time of the year. we got some solid goaltending from `Jaro' and found a way to get two points."

Chiasson scored on a power play to give the Canucks a 1-0 lead three minutes into the game, tipping a cross-ice pass from Pettersson into an open right side.

The Canucks have five power play goals in their last three games and have killed all nine penalties in that stretch.

"I don't know the exact key," Canucks coach Bruce Boudreau said. "I think using the same units really helps. We've been able to use those same five guys for the most part on every power play. The great power plays in the league, and there are a lot of them, they seem to know what to do every time they get the puck,"

Horvat scored twice in the first 90 seconds of the second period, picking up the puck net behind the net and tucking a wraparound past Sateri just 52 seconds into the period. He scored 38 seconds later on a wrist shot from the left circle after taking a nifty back-pass from Vasily Podkolzin.

"Whenever I'm playing my best hockey it's playing defensively first, and kind of letting the offnese take over for there," Horvat said.

Schmaltz skated in alone and put a back-hander through Halak's legs to make it 3-1 at 7:27 of the period. Schmaltz has 50 points, two short of his career high set with Chicago in 2017-18.

"We did a lot of good things," Arizona coach Andre Tourigny said. "If you look at the score, you may think the game went out of our hands quickly. But if you look at the actual pace and the chances we had and the possession we had. We're frustrated, but it's a step in the right direction."

NOTES: The Canucks are 26-13-8 and 15-6-3 on the road since Boudreau replaced Travis Green on Dec. 5. ... Coyotes top-six D Jakob Chychrun (lower body) and J.J. Moser (upper body) missed their 11th straight game. ... Coyotes F Lawson Crouse, third on the team with 20 goals, missed his fifth straight game. ... Vancouver, which has won the first two games in the season series, entered with 203 goals for and 203 goals against. The teams met in Arizona for the first time since Feb. 28, 2019. ... Canucks and former Coyotes D Oliver Ekman-Larsson and F Conor Garland made their first appearance in Arizona after being traded to Vancouver in the offseason. "OEL played well," Tourigny said. "He was one of their best players," Ekman-Larsson signed autographs after the warump skate. Garland had two assists.

Coyotes: At Vegas on Saturday.