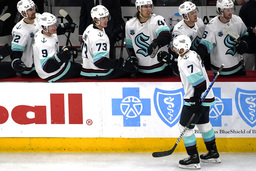 Alex Wennberg scored his 10th goal in the second period and Jordan Eberle added his 18th late in the third to seal it.

Grubauer was only lightly tested by the Blackhawks, who dropped their sixth straight game (0-4-2) and occasionally were booed by their home crowd. Grubauer, who posted his 20th career shutout, also was in net for the Kraken's first shutout on Feb. 2 against the Islanders in New York.

"That was a really good team effort by us, protecting everything and blocking shots," he said.

Grubauer stopped a prime chance by Patrick Kane in the opening minutes, then the Kraken went on to control play and outshoot Chicago 17-3 in the first period.

"They had a really good chance on the first shot, then nothing for 12 minutes," Grubauer said.

At the end of the second, the Kraken allowed only one shot during a Blackhawks power play that lasted 3:56 and included a 5-on-3 advantage for 1:56.

"Grubie didn't have to make a ton of saves on the kill, but he had some good saves 5-on-5. He looked really confident."

Both the Kraken and rebuilding Blackhawks have been eliminated from playoff contention. Chicago has missed the postseason in four of the past five seasons after qualifying for nine straight and winning three Stanley Cups during that stretch.

"Even though we're out of the playoffs, we want to win games," said Alex DeBrincat, the leading goal scorer for Chicago. "It sucks losing. It's no fun.

The Blackhawks dominated the first few minutes, but then Seattle took over in a scoreless first period.

Wennberg's flashy goal opened the scoring 47 seconds into the second.

Wennberg made a nifty move to dance past flatfooted Chicago defenseman Jake McCabe in the slot. He skated to the net and deked Lankinen to the ice before tucking in a low shot.

"I was going to maybe shoot and I changed my mind and it turned into like a breakaway," Wennberg said.

Grubauer made a point-blank stop on rookie Lukas Reichel with five minutes left in the second to thwart a 2-on-1 Chicago break.

The Blackhawks were booed by their home crowd as they sputtered on a 5-on-3 power play over a 1:56 span, then a two-minute 5-on-4 advantage, to close out the second.

The lengthy power play was set up by an interference minor on Ryan Donato and a high-sticking double-minor to Carson Soucy.

Kane's shot hit the post and Seth Jones' attempt clanked off the crossbar during a Blackhawks power play late in the third.

Grubauer was sharp on a couple of close-in Chicago chances in the final minutes.

During a video tribute in the first period, the Blackhawks announced they will retire Hall of Fame forward Marian Hossa's jersey No. 81 next season. The 43-year-old Hossa signed a one-day contract with Chicago and officially retired as a member of the team in a pregame ceremony.

Hossa played the final eight seasons of his 19-year career with the Blackhawks and was a key contributor in Chicago's Stanley Cup runs in 2010, 2013 and 2015.

He stopped playing after the 2016-17 season at age 38 because of a severe case of eczema that caused lesions all over his skin. The condition was linked to sweat and bacteria from hockey equipment.

NOTES: Seattle D Vince Dunn skated off the the ice gingerly in the second period - but returned for the third - after getting tied up with Chicago's Sam Lafferty and sliding hard into the boards. . Kraken F Jaden Schwartz (upper body) missed his seventh game. . Chicago F Henrik Borgstrom, F Philipp Kurashev, F MacKenzie Entwistle and D Riley Stillman were healthy scratches as interim coach Derek King juggles young players in and out of the lineup.