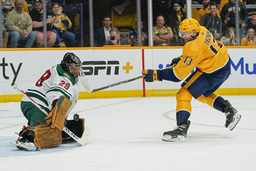 Roman Josi and Philip Tomasino had a goal and two assists, Matt Duchene had a goal and an assist and Juuse Saros made a season-high 47 saves for Nashville, winners of three of four as they try to keep pace in the tight Western Conference playoff race. Filip Forsberg had three assists and Mattias Ekholm added two.

"I think Juice was at the level that we need him to be at," Predators coach John Hynes said of Saraos. "He's an elite goalie in the league. He was elite tonight. That's nice to see. When he plays at that level, he gives us a chance to win every night."

Mats Zuccarello and Kirill Kaprizov each had a goal and an assist for Minnesota. Marc-Andre Fleury made 27 saves. The Wild were 9-0-1 in its previous 10 games.

Josi scored the game's first goal at 5:10 of the opening period. With the Predators on a power play, he snapped a wrist shot from just above the left faceoff dot that beat Fleury high to the far side.

Zuccarello made it 1-1 with about six and a half minutes left in the first, but Johansen answered 25 seconds later with another power-play goal for the Predators.

"We have to find a way just to stay the hell out of the box because obviously, they've got special players and special power-play players and they hurt us," Minnesota coach Dean Evason said. "Our 5-on-5 game is great."

Johansen struck again with less than a minute left, his second on the power play, this time redirecting Josi's slap pass from the center of the blue line past Fleury.

"Yeah, awesome to get it in a big game, and at home here, too," Johansen said of his hat trick. "It was really cool."

Just seconds after another Wild power play expired, Josi carried the puck into the right circle and he slipped a backhand pass to Tomasino in the slot, where the rookie beat Fleury with a one-timer low to the stick side.

Kaprizov scored his 40th of the season at 17:51 of the second with the Wild on a two-man advantage.

Duchene scored at 13:28 of the third and Johansen scored his third into an empty net with 6.1 seconds remaining.

It was the third matchup of the season between the Predators and Wild. Josi has posted 11 points (four goals, seven assists) in those three games. Three of the four goals have come on the power play.

Nashville has won all three matchups, outscoring the Wild 17-6.

Nashville welcomed back defensemen Dante Fabbro and Mark Borowiecki to the lineup. Both blueliners were sidelined with upper-body injuries. Fabbro missed five games and Borowiecki four.

Borowiecki wasted no time in getting into the action, as he dropped the gloves with Minnesota's Marcus Foligno early in the first period in his first shift of the game. Later in the first, he fought again, taking on Nicolas Deslauriers. He also picked up an assist on Duchene's third period goal.

Wild defenseman Matt Dumba was injured in the second period and did not return. At 4:01 in the second, Dumba hit Nashville's Michael McCarron in the neutral zone and received an interference penalty on the play. He left the ice and went directly to the dressing room. The team announced he had an upper-body injury.

Predators: At Ottawa on Thursday.

Wild: At St. Louis on Friday to conclude a four-game trip.