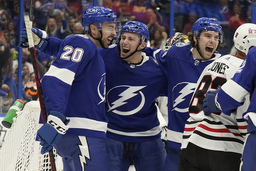 TAMPA, Fla. (AP) Ross Colton scored two goals and added an assist, Steven Stamkos and Brayden Point both had a goal and an assist, and the Tampa Bay Lightning beat the Chicago Blackhawks 5-2 on Friday night.

Andrei Vasilevskiy made 21 saves and improved to 13-0-0 against the Blackhawks in the regular season. He went 1-1 during the 2015 Stanley Cup Final in which Chicago beat the Lightning in six games.

Brandon Hagel added an empty-netter in his first game against his former team.

"The guys gave me a puck, so it was pretty cool," Cooper said. "It will go somewhere good. Seven-hundred - 10 years ago I wasn't even sure I'd ever coach one let alone 700. Pretty special group we've had along the years. It's a family here."

Calvin de Haan and Alex DeBrincat each had a goal, and Kevin Lankinen turned aside 38 shots for the Blackhawks, who lost 4-0 at Florida on Thursday night and have dropped seven of nine (2-5-2).

"They're a skilled team," said de Haan of the two-time defending Stanley Cup champion Lightning. "They're a veteran group. They've been around each other a long time. They seem to know where everyone is on the ice at all times It's a good test for a young group like ours to try and compete with those teams. It's tough, they're contenders."

After blowing a two-goal lead, the Lightning took a 4-2 advantage on a pair of goals by Colton in the second. After a rebound effort at 6:12, Colton then scored with 7:45 to go from just outside the crease off a between the legs backhand pass from Nicholas Paul.

"It was a sweet one," Cooper said.

Stamkos opened the scoring on Tampa Bay's 11th shot 6:11 into the game.

The Blackhawks battled back later in the first it to tie it at 2 on goals by de Haan and DeBrincat, who got his 39th this season.

De Haan got his third goal of the season, and second in three games, when his bouncing shot from the blue line eluded Vasilevskiy 1:59 after Point's goal.

DeBrincat got the equalizer during a power play with 2:39 left in the first, a period where Chicago was outshot 19-9.

There was a video tribute during the first period for Tyler Johnson, who played in Tampa for the first time since being traded to Chicago during the offseason. A member of the 2020 and 2021 Stanley Cup championship teams, Johnson circled in front of the bench to salute the fans.

"It's pretty cool," Johnson said, "Obviously Tampa is always going to have a special spot in my heart."

Stamkos became the 56th NHL player to reach 470 goals. He has four goals and eights points during a five-game point streak. ... Tampa Bay is 9-0-1 in its last 10 games against Chicago. ... Kucherov and Pierre-Edouard Bellemare were the only Tampa Bay skaters not to have a shot on goal.

Lightning: Former Tampa Bay star and member of the 2004 Stanley Cup championship squad, Martin St. Louis makes his first appearance in Tampa on Saturday night as the interim coach of the Montreal Canadiens.

"I'll run into him tomorrow and get the skinny on what's going on with him," Cooper said. "He's got that team pointed in the right direction."