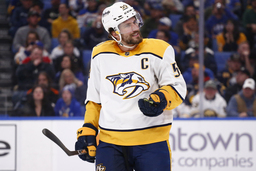 BUFFALO, N.Y. (AP) Sabres rookie forward Peyton Krebs was accustomed to playing in front of loud and raucous crowds during his brief stint with the Vegas Golden Knights.

It wasn't until Friday, some five months after being traded to Buffalo, when Krebs experienced the electric jolt the Sabres' fanbase can bring during the team's first sellout of the season.

On a night the franchise celebrated its past by raising a banner in honor of broadcaster Rick Jeanneret, who is retiring after 51 seasons, the Sabres received yet another glimpse of a promising future with a 4-3 win over the Nashville Predators.

"Obviously, we haven't had more success here in the past, but we're a young group and we're excited for the future," said Krebs, who was acquired along with Alex Tuch in a trade that sent former captain Jack Eichel to Vegas in November.

"I think this game is a start to that. And obviously, we've got a lot of work to do," added Krebs, who had a goal and assist. "But now, that was a lot of fun. When playoffs hopefully come around here soon, it's going to be electric."

Victor Olofsson scored the go-ahead goal with 5:35 left in the second period, Craig Anderson stopped 22 shots and Tage Thompson scored twice for Buffalo. The Sabres never trailed and continued their late-season surge (5-0-3) despite being all but mathematically out of playoff contention.

The Predators had a two-game winning streak snapped and blew an opportunity to gain ground in a tightly contested Western Conference playoff race, in which they control the first of two wild-card spots.

The chants of "RJ! RJ! RJ!" began during a 15-minute pre-game ceremony, and re-emerged during a post-game celebration in which Jeanneret was escorted to the ice by Tuch. Aside from posing for pictures with the team, Jeanneret was also honored by being named the game's first star.

"You get you get chills, a little teary eyed, for sure, seeing that," Krebs said. "That's a special moment and we want to have a lot more of those coming up."

Forsberg credited the Sabres for their effort, while expressing disappointment in the Predators' inability to gain points.

"They're not necessarily in the playoff race right now, but they're playing really hard," Forsberg said. "It's a tough question. I think we should win every game we suit up for, but we need we need to get points. And tonight we didn't get any."

The Predators rallied from a 3-1 deficit by scoring goals 1:38 apart on goals from McCarron and Lauzon, who tied the game with 59 seconds left.

Oloffson's goal came on the power play, about 90 seconds after the Predators were penalized for too many men. Krebs began the play in the left corner of the Nashville end, by feeding Dylan Cozens in the left circle. Cozens wheeled around and fed Olofsson, who was open in the right circle, from where he one-timed a shot to beat Saros on the short side.

Coach Don Granato was encouraged by how the Sabres overcame early jitters of playing in front of a packed house by regaining their composure over the final two periods.

"I don't want to get too far ahead of ourselves but I loved that we had enough adversity in that game in front of 18,000 people or whatever the sellout number is," Granato said.

"We get the lead and we just went into shut-down mode," he added. "Our guys didn't get rattled in the atmosphere."

The sellout was the Sabres' first since a 5-2 win over Toronto on Feb. 16, 2020, not including the Heritage Classic in Hamilton, Ontario, in which Buffalo was the home team last month. Last season, only a limited number of fans were allowed to attend Sabres games because of COVID-19 restrictions.

Fans did the wave in the third period, and chanted "Let's Go Sabres!" to create an electric atmosphere in an arena that's been barely half full for most games this season - a reflection of the fanbase's frustration the team's latest rebuild. Last season, Buffalo finished last in the standings for the fourth time in eight years.