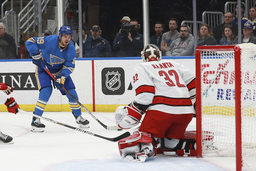 "I mean my birthday present is to win this game," Svechnikov said. "That's the fun part."

Antti Raanta won a battle of Finnish goalies with 30 saves. Ville Husso stopped 21 of 26 shots, and the Hurricanes scored two empty-net goals when Husso was pulled with 5:30 to play.

"Obviously, when you score seven goals, you kind of have to win the game," Raanta said. "It's always a little stressful when a team takes a goalie out so early. We did a great job there."

Carolina is the No. 3 team in the league and improved to 44-15-7, good for 93 points and first place in the Metropolitan Division. The Hurricanes had won just one of their past six games (1-3-2) before the victory.

"It wasn't one of our better games. It's just that everything we shot went in," coach Rod Brind'Amour. "I don't know that we played great. Two periods we were fine. In the third period, naturally you get up by three and you have a tendency to lay back. This was a good win."

Martin Necas, Brett Pesce and Nino Niederreiter also scored for Carolina. Pesce and Necas each also had an assist.

Pavel Buchnevich scored both of St. Louis' goals, giving him 21 this season. The two goals give Buchnevich 100 goals in his career. The Blues are 1-3-2 in their past six games.

Necas gave Carolina a 1-0 lead on a short-handed goal at 2:37. The Blues have surrendered the opening goal in five consecutive games.

"You're not on the PK (penalty kill) to score goals but to kill the penalty," Necas said. "But when you have the opportunity, we want to score as well. Of course, that definitely helps."

Carolina outscored St. Louis 3-1 in the second period for a 4-1 advantage.

Two quick goals gave the Hurricanes a 3-0 early in the period. Jarvis went around Colton Parayko and beat Husso just 1:07 into the period.

"Obviously a good play by him. Credit him," Parayko said. "Obviously good players are going to make good plays."

Pesce buried a wrist shot from the high slot at 3:16.

"You know, I didn't think our start was that bad to be honest with you," Berube said. "But we did fall behind. First period was OK. Second period, we get scored on there pretty quick. I thought that had a real impact on our team that period."

The Blues cut the lead to 3-1 when Buchnevich scored on a backhand after getting a feed from Nick Leddy at 13:12 in 4-on-4 play. It was Leddy's first point since he was acquired from Detroit.

Carolina rebounded with a power-play goal. Svechnikov one-timed a pass from Sebastian Aho at 14:38 to give the Hurricanes a three-goal cushion.

St. Louis scored on its fifth power-play opportunity when Buchnevich converted a wrist shot from the top of the slot at 6:30 of the third period.

Svechnikov added an empty-net goal at 15:05 and Niederreiter followed with one at 15:57. The final goal was scored by Jarvis at 17:55.

This was the final time these teams play this season and Carolina swept the series. The Hurricanes were victorious 3-2 on Nov. 13 in Raleigh, North Carolina.

This was the third time this season Carolina has scored seven goals in a game. ... D Brady Skjei also celebrated a birthday Saturday. Skeji turned 28. ... Ian Cole, who was selected 18th overall by St. Louis in the 2007 NHL Draft, returned with Carolina. The Hurricanes are the fifth team Cole is with since he was traded away in 2015 for Robert Bortuzzo.

Hurricanes: LW Jordan Martinoor (undisclosed) will be out for at least two weeks.

Carolina: At Washington on Monday night.