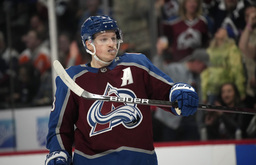 DENVER (AP) Cale Makar wasn't even aware he accomplished a little team history. He had to be told by a teammate on the bench.

Makar scored twice to set the single-season franchise goal record for a defenseman and the Colorado Avalanche beat the Philadelphia Flyers 6-3 on Friday night.

Makar's goal on a wrist shot in the third period was his 24th of the season, surpassing the mark defenseman Sandis Ozolinsh set in 1996-97.

"It's not in the back of my mind when I'm out on the ice trying to do what I do," Makar said of the record. "It wasn't really something that clicked in my brain right away."

One thing he was aware of: Two mistakes he made that led to goals. Those nagged at him.

"On an individual basis, I don't think I had my best game," Makar said. "I'm my hardest critic. ... For me, the stat part of it is not critical in terms of how I play."

"I like he holds himself to high standards," Bednar said. "Take those two plays out of it, I thought he was exceptional. ... You don't see Cale make mistakes often, but he made two tonight and they end up in back of our net."

Nazem Kadri had a goal and two assists as part of a four-goal first period to set the early tone for the Avalanche. J.T. Compher, Mikko Rantanen and Kurtis MacDermid - on his 28th birthday - added goals for Colorado.

Pavel Francouz stopped 29 shots for the NHL-leading Avalanche, who are trying to capture their second straight Presidents' Trophy for the best mark in the league.

James van Riemsdyk, Zack MacEwen and Max Willman scored for a Flyers team playing the second game of a back-to-back following a win in St. Louis. Carter Hart settled in after a rough start that included a shot banked in off his mask and another through his pads.

"We know they're a good team. They came out hard and fast," said Hart, who faced 51 shots. "They were just all over us. Just had to battle through it."

Trailing 5-1 in the second period, the Flyers scored twice to make things interesting before Makar's second goal sealed the win. There was a late skirmish between Joel Farabee and Kadri that resulted in several blows before they fell to the ice.

"We're kind of striving to play that perfect game," Bednar said. "Tonight, some of those mistakes are on us. They didn't force us into the mistakes. We fell asleep a couple of times. ... It's about raising the bar."

MacDermid's score in the second period was goal No. 54 by the team's defense this season. That broke the franchise mark set in 1992-93 when the team was the Quebec Nordiques.

This was the sort of bounce-back effort the team was looking for after a rare home loss Wednesday against Vancouver.

"I thought we had a lot of depth scoring tonight and we're going to need that down the stretch," Makar said. "So effort-wise, I thought it was there all game."

Avalanche forward Artturi Lehkonen was a scratch as he works through immigration issues. He was acquired in a trade-deadline deal with Montreal. ... Colorado beat the Flyers 7-5 on Dec. 6 in Philadelphia. ... Rantanen has a career-best 32 goals this season.

Flyers center Nate Thompson (shoulder) has been cleared after being sidelined since late November.

"Great news for us," interim head coach Mike Yeo said. "Definitely looking forward to getting him back."

Avalanche forward Andrew Cogliano joked that he considered himself the cleaner roommate when he was teammates/housemates with defenseman Jack Johnson at the University of Michigan.

No arguments from Johnson, either, only a caveat: "I definitely wasn't messy," he cracked.

Cogliano said it's nice catching up with Johnson since his arrival in Colorado at the trade deadline.

"Rekindle our time in Michigan together," said Cogliano, who had an assist Friday. "Get to know him better now that we've grown up."

Flyers: At Nashville on Sunday.