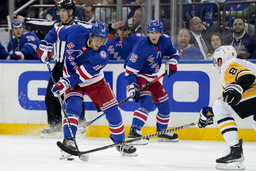 Alexis Lafreniere, Frank Vatrano and newcomer Andrew Copp also scored for the Rangers, who scored three times in the first four-plus minutes of the game against Penguins goalie Tristian Jarry, who entered with a five-game winning streak and a 7-1-0 mark in his last eight appearances.

The Rangers recovered from Tuesday's 7-4 road loss to the Devils with a convincing performance against the Penguins, a potential first-round playoff opponent making their first visit to Madison Square Garden this season.

"We had a lot of jump, an outstanding start," Rangers coach Gerard Gallant said. "I was really happy with how we played all night."

Shesterkin won for the 31st time as he allowed two or fewer goals for the 12th time in his last 16 starts.

The Rangers have won five of their last seven games and eight of 12. New York also continued its dominant play at home, improving to 8-2-1 in its last 11 at the Garden and 21-6-3 overall. The Rangers play 11 of their remaining 17 games at home.

The Penguins arrived with a league-best 21-7-5 road record and an 11-2-3 mark in their previous 16 games against the Rangers, who seized control by scoring three times in the opening 4:16.

"We came out strong and on our toes. Especially at home, that's a great start," Zibanejad said. "That was a big game against these guys."

Lafreniere started the early barrage at 2:07, sliding the puck past Jarry for his 14th goal of the season. Lafreniere's new linemates on Friday - Filip Chytil and Barclay Goodrow - assisted. Lafreniere has a career-best five-game points streak.

"That was a nice play by Fil and I was lucky it went in," said Lafreniere, the first overall pick by the Rangers in 2020 who has a career-best 23 points in his second NHL season. "Every game you come to the rink you want to play your best game."

Kreider then electrified the Garden crowd at 3:58, taking a pass from Zibanejad before rifling a shot past Jarry.

Just 18 seconds later, Vatrano made it 3-0 for the home team with his 12th of the season and second goal as a Ranger since joining New York in a trade from Florida on March 16. It was the fifth-fastest three goals to start a game in franchise history.

The Penguins never recovered as the Rangers moved within a point of Pittsburgh for second place in the Metropolitan Division.

"We got outplayed in every facet of the game. They were just way better than us in every area,? Penguins coach Mike Sullivan said. "We lacked awareness. We just weren't good in any aspect of the game."

The Rangers killed off a four-minute high-sticking penalty to Dryden Hunt to close out the first, during which New York outshot Pittsburgh 11-5.

"They dominated in every area and we didn't have a lot of pushback," Penguins captain Sidney Crosby said. "There's not much to take from that one. We have to make sure we don't have an effort like that the rest of the year."

Kreider scored his second goal of the game and 44th of the season at 6:37 of the second, firing the puck past Jarry with the Ranger short-handed.

Kreider has six goals in his last six games and 10 in his last 12. He is the first player since Washington's Peter Bondra in 2000-01 to score 44 or more goals - including 22 on the power play and three short-handed - in a season.

The veteran Ranger cited his team's overall effort for the decisive win over a division rival.

"Doing your job to the best of your ability is the biggest thing for this group," Kreider said.

Copp, who was acquired from Winnipeg on Monday, scored his first goal as a Ranger and 14th of the season at 17:47 of the third.

NOTES: Penguins forward Evgeni Malkin was a late scratch due to a non-COVID illness . Pittsburgh also scratched forward Brock McGinn. . The Rangers scratched forward Ryan Reaves, Greg McKegg, Julien Gauthier and defensemen Justin Braun and Libor Hajek. . The teams meet again March 29 in Pittsburgh and April 7 at MSG. . The Penguins won the previous meeting, 1-0 at Pittsburgh on Feb. 26. . The Rangers are 26-4-2 when they score first ... The Rangers will play all but one of their remaining games against Eastern Conference opponents, with only April 19 at home against Winnipeg, the exception.