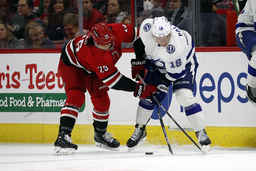 Sebastian Aho also scored for Carolina, and Seth Jarvis had two assists. Frederik Andersen made 27 saves for just his second win this month.

"We played our game and it worked out," Necas said.

Nick Paul scored in his first Tampa Bay game and Alex Killorn closed the gap with 59.3 seconds remaining. Andrei Vasilevskiy stopped 38 shots, but the Lightning lost for the fifth time in its last seven games.

"We got on our heels a little bit," Tampa Bay captain Steven Stamkos said. "We're kind of stuck in that rut right now."

The Hurricanes went six consecutive games without a power-play goal and then scored two of them within a seven-minute span in the second period. Those accounted for the team's first two goals.

"I thought we had good entries. We moved it around good," DeAngelo said of the power plays. "When you play a team like Tampa, those need to go in and they did."

"We were able to cash in on a power play which was the difference which we hadn't been doing the last few games," coach Rod Brind'Amour said.

Necas scored at 6:56, giving the Hurricanes their first goal in more than five full periods and an overtime session dating to the second period Friday night.

Paul got Tampa Bay even by redirecting Ross Colton's shot 9:39 into the second.

DeAngelo regained the lead for Carolina when he took a shot from inside the blue line and it bounced off a Tampa Bay player.

DeAngelo notched his first point in two games since returning from an 11-game absence because of an upper-body injury.

The Hurricanes went up 3-1 at 8:09 of the third when Aho controlled the puck with his skate before jamming it across the line as Vasilevskiy was a tad late in responding. Aho has a team-leading 28 goals.

"The penalties hurt us and we spent too much time in our zone," Tampa Bay coach Jon Cooper said.

"It would be nice if they keep coming, especially against (Vasilevskiy)," Necas said.

Other than a preseason game, this was the first visit for the Lightning to Raleigh since last June, when Tampa Bay won Game 5 to complete a playoff series with Carolina. The Lightning also won Games 1 and 2 on the road.

The Hurricanes improved to 2-0-0 against Tampa Bay this season, with the final scheduled meeting next week in Florida.

This game marked the first stop on a four-game trip for Tampa Bay.

Paul, a left winger, joined the Lightning following a weekend trade with the Ottawa Senators. He scored 11 goals with Ottawa.

"As the game went on, I started feeling it out and getting more chemistry with the guys," Paul said.

Cooper said of Paul: "I like what we saw. He's going to fit in well."

The downside was that Paul was on the ice for both of Carolina's power-play goals.

Forward Max Domi joined the Hurricanes earlier in the day after a trade from the Columbus Blue Jackets on Monday. He wasn't in the lineup, but that should come later in the week.

Lightning: At Boston on Thursday.