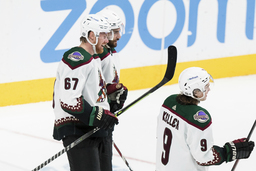 SAN JOSE, Calif. (AP) Noah Gregor had the go-ahead goal in the third period and added an assist to help the San Jose Sharks rally past the Arizona Coyotes 4-2 on Sunday night and snap a three-game losing streak.

Timo Meier, Nick Bonino and Rudolfs Balcers also scored for San Jose, who trailed 2-1 in the third period with just under five minutes to play after Arizona's Lawson Crouse scored.

But Meier tied it 22 seconds later when he beat Karel Vejmelka to the upper corner. Gregor gave the Sharks their second goal in a 44-second span to put San Jose ahead 3-2.

"Great goal, using his speed," Sharks captain Logan Couture said of Gregor. "I thought he was excellent all night. He was probably our best player - all over the puck, creating chances. He's had a lot of games like that."

Balcers added an empty-net goal in the final minute for San Jose to seal it.

Phil Kessel also had a goal for the Coyotes.

"We weren't able to execute and when that happens you need to simply your game," Coyotes coach Andre Tourigny said. "We found a way to score a big goal and we need to make more plays."

Crouse, who also had an assist, scored when his bouncing shot was knocked into the goal by Sharks goalie James Reimer, who stopped 23 of 25 shots.

"It's a fast-moving season and we're playing every other day now," Crouse said. "I try not to overthink things right now and just go out and play hockey."

Bonino gave the Sharks a 1-0 lead 20 seconds after the opening faceoff when tipped in a shot from Andrew Cogliano in front of the net. Gregor, credited with the second assist, won a 50-50 puck off the backboard to create the scoring opportunity.

The Coyotes evened things at 18 minutes of the second period on Kessel's goal.

"We had a good last four minutes," Sharks coach Bob Boughner said. "Big goals from Timo and Noah, who I thought had his best game of the year. We came out hard the first five minutes, and then I thought that we started trying to be a little too fancy, not shooting enough pucks."

Coyotes: D JJ Moser missed his second game with an upper-body injury that forced him out of Tuesday night's game at Montreal. He had appeared in every game since Dec. 15. ... Jacob Chychrun missed his fourth game with a lower-body injury.

Sharks: D Nikolai Knyzhov was officially declared out for the season with various lower body problems. He did not play this year. Boughner indicated he might be ready for the start of training camp.

Sharks: Travel to Calgary to face the Flames on Tuesday night.